Which is more important, line coverage or branch coverage?

I've been setting up code coverage for some of my clients' projects and some of my own open source projects, like Clean Architecture and Specification (100%!) and Guard Clauses (99%...). I wrote up how to configure Azure DevOps to generate code coverage reports that properly merge the results from multiple test projects using ReportGenerator. When you look at a code coverage report, whether it's run in the console or online, you'll frequently see metrics like these: 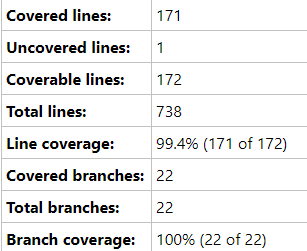 Ok, I'm not actually going to answer that last question here, because that can be its own article, but we will look at branch coverage versus line coverage and which one you should focus on.

Obviously if you hit every single line, that should be more important than if you hit every branch, right? Some tools will measure method and class coverage, letting you know what percentage of classes your tests might have hit even if only one test did one minor thing with the class. I'm skeptical of the value of knowing I have high class or method coverage when I have no idea how much of the actual code in those methods or classes was tested. And just the same, clearly, measuring how many lines of code were tested should be more important than how many branches were covered.

It turns out branch coverage is actually also important.

Let's consider an example. This is taken from this excellent Stack Overflow answer.

Here's a C# or Java method that takes in one parameter and that contains a single if statement. Its cyclomatic complexity is 2, because there are exactly two paths through this method. That means its Total branches is also 2. If the parameter isCoolUser is true, every line of this method will be executed.

So, let's say you write a single test that calls this method, passes it a value of true, and asserts that it returns the expected integer value. Now you calculate code coverage. Your test hit every line, so you have 100% line coverage. And you hit the true case for the if condition but not the false case, so your branch coverage is 1 out of 2 or 50%.

So what? Well, it turns out that if you ship your code with just one test (and 100% line coverage, remember!), you'll be shipping a bug that occurs whenever you pass false to the method. The last line will result in a null reference exception because user will be null.