I'm involved in quite a few businesses and ventures at any given time, and most of them have an email account associated with them. My preferred email client is Google/GMail/Google Apps/G suite, mainly because it's fast, ubiquitous, and (mostly) free (google apps was free for a very long time, and now has pretty reasonable per-user pricing similar to O365). Checking a bunch of different accounts is actually pretty easy to do on my phone, but doing it from the desktop using a browser can be tedious. One approach is to have multiple browsers - I used to use Chrome, IE, and Firefox in part so that I could use each one separately to log into GMail as different accounts. More recently, Chrome will let you have multiple sign-ins, which is great, but tends to mean I end up with 5-6 different instances of Chrome running, each with multiple tabs. Eventually that takes a toll on my system resources and my ability to focus with so many things in my taskbar.

Recently while on a trip to visit Microsoft, Nick Craver introduced me to WMail. WMail is a lightweight native mail client for Mac and Windows. It does GMail (and Inbox) accounts extremely well, and is super lightweight (unlike other mail clients that are insanely bloated - LookOut for those). It's also free and very easy to set up. Once you've installed it and added a few accounts, it looks something like this: 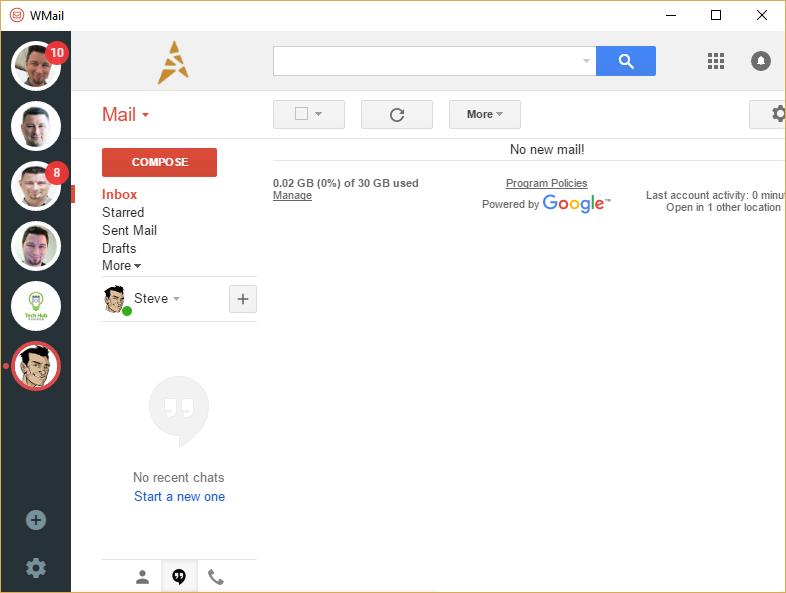 WMail basically just hosts an instance of Chrome for each Google mail account you use, and lets you see at a glance if you have new messages. A while back I updated my profile photo to something different in each of my email accounts so that it would be easier for me to distinguish them from one another (mainly in Chrome), and you can see that's helpful here, too. With WMail in place, I should rarely need to open more than one or two Chrome instances, though I'm sure I'll still need to do some of that since I do have separate credentials I need to use for different sites based on which business or organization I'm doing work as at that moment.

One of my favorite productivity features of GMail is its keyboard shortcuts. It's very quick to get through a lot of email when you can just hit 'e' to archive it, and j/k to move up and down through the list, and 'space' to select or unselect (for bulk actions). Since WMail is really just Chrome, all of these still work just as they would in the browser.