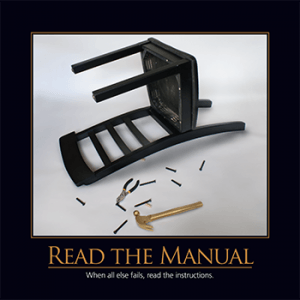 Recently, Brendan, Michelle, and I launched a Kickstarter campaign to fund the creation of a 2016 Software Craftsmanship motivational wall calendar. Our funding goal is pretty aggressive, so I appreciate any support you can offer. I’d especially like you to share this project with your fellow software developers. Think of it like this:

If someone gets you one of these, what are they trying to say about your code? But… if you are handing these things out, everybody’s going to know you’re a real software craftsman, right?

In all seriousness, in this post I want to share a bit about the history of these calendars. I’ve mentioned a few times that the idea for the first images came from Derick Bailey’s blog post about SOLID motivational posters. It’s also worth crediting the Despair.com demotivator calendars, which offered the biting sarcasm and humor that we were going for. But beyond all of that, why would a software consulting company (NimblePros) produce a calendar, of all things? How does that make any kind of business sense?

The basis for that decision goes back a ways. Before starting NimblePros, Michelle and I had built up and eventually sold an online marketing and advertising company, Lake Quincy Media. We picked up a lot of marketing and advertising experience over the course of running LQM, and we worked with others with greater experience still. One thing we thought we tended to do pretty well was frugally produce branded items to give to our customers and publishers (swag). (We still get requests for the amazing oversized ASPAlliance mugs, not to mention juggling balls and rubic’s cubes. If you are going to give someone something, it should be useful and fun, not something that fills up the junk drawer.)

However, during this time it occurred to us that the best swag items were things people would actually pay for if given the opportunity. The trick was to create something interesting enough that the intended audience wanted it in its own right. Apparel brands like Nike and Under Armour, as well as luxury brands across many industries, understand this, and their customers are more than happy to show off the logos of the brands they want to associate with. The goal for the calendars was the same: produce a product that would have enough appeal to our target audience (software developers) that they would gladly purchase it themselves.

The other marketing factor that went into the decision to produce the calendar was the relative cost of swag compared to the amount of time it’s actually seen. We had always been aware of this (our marketing budget was rather small, so we tended to optimize), so for instance we’d tried to focus on swag items that someone would keep out on their desk at all times, rather than something that might end up in a drawer or worse, the trash. A $10 coffee mug that becomes someone’s favorite mug and they show it off at the office every morning has far more branding value than a $10 t-shirt they wear once and then discard (or only wear under other things). With the calendars, this was a marketing piece that had great staying power, since it would ideally be hung somewhere in the workplace, where it would stay for an entire year.

We had a great design team and a lot of creative team members who helped come up with ideas for the calendars each year. The first year, we used a fair bit of stock photography (combined in interesting ways), but later years involved mostly our own models, props, sets, and photography.

Although the initial business motivation was to produce a branding piece for NimblePros, the calendars have come to mean more than that. When we didn’t produce one for this year, we definitely heard about it from many previous customers, and although it’s a lot of work to put together, we appreciate the response we get from the community. Personally, I really hope we’re helping to raise awareness among development teams about guiding principles and anti-patterns, ultimately improving the overall quality of software our industry produces.

Since we no longer work together at one company, there is no longer a single company to subsidize the production of the calendar. However, we still feel that the principles of the calendar are worth promoting, and we hope enough members of the software community agree to help us create another one for next year.

We appreciate your support and hope you enjoy the 2016 calendar.