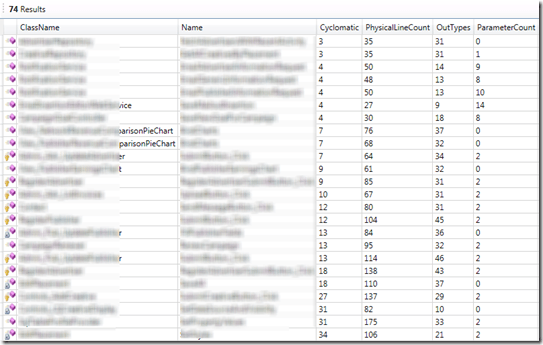 There are a number of code analysis tools available for .NET developers, including some stats that are built into the pricier SKUs of Visual Studio. Recently, I’ve been playing with a relatively new product (released earlier this year by Microsoft agile consulting shop NimblePros.com) called Nitriq. Nitriq is a bit like LINQPad for your code. If you’re not familiar with it, go download LINQPad now – it’s a great tool worth paying for. I’ll wait until you’re back…

Back? Great! I think we were discussing using Nitriq for code analysis, which by the way you can run for free on a single assembly. Before going any further, it’s worth mentioning something that many of us often forget or perhaps never learned, and that is that code is data. Some languages, like Lisp, make it very easy to manipulate code as if it were data (and vice versa), but even in static, managed languages like C# it is worth remembering that our code itself is data that we can query, analyze, and from which we can learn.

So before we go any further, what kinds of questions might we ask of our code? One of the best use cases for such code analysis is to find code smells, anti-patterns, and other things that would generally indicate a lack of quality. Static Cling is one-such anti-pattern I’ve described previously that it would be great if we could detect it.