If you’re using the dotnet CLI tools to develop your .NET Core apps, you’re probably very familiar with typing dotnet run and/or dotnet test every time you make a change to your app. This kind of manual process, even if you’re a quick typist (or just use up-arrow, enter), can add friction to your process. Friction is bad, and can bring you out of the zone when you’re trying to focus on improving your app and what it does. One way you can eliminate this friction is to have your app automatically restart or run its tests whenever a change is made to it. You can use the dotnet watch tool for exactly this purpose.

Here’s a screenshot of what things look like when you have dotnet watch running your unit tests (click for larger image if necessary): 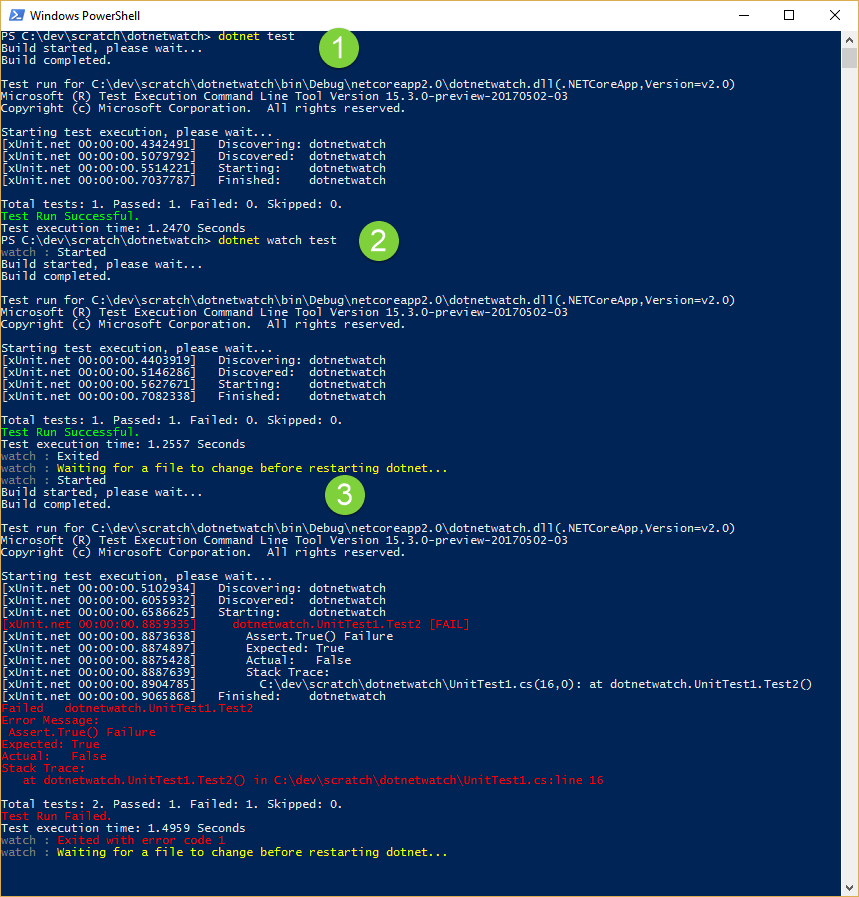 In step 1, I’m just running the tests as I normally would to confirm they work as expected. Note there is only 1 test and it is passing (this is just a new instance of the dotnet new xunit project template).

In step 2, I execute dotnet watch test, which runs the test(s) again and begins watching for changes.

In step 3, I’ve just created a second (failing) test and saved my test file. You can see that this triggers dotnet test to run again, building the project and once more running the tests, including the new failing test.

Configuring dotnet watch in your Project

To use dotnet watch, you need to add a reference to the tool to the project you’re using it with. This is done by editing the csproj file and adding a new section:

Once you’ve added this and performed a restore, you should be able to use dotnet watch with standard dotnet commands. The two most common commands you’ll use it with are run and test, to support automatically re-running the app or automatically re-running tests on the app. You can use the usual supported arguments with these commands, too. For more info, check out this article in the docs.

Follow these steps to get dotnet watch working in a test project: