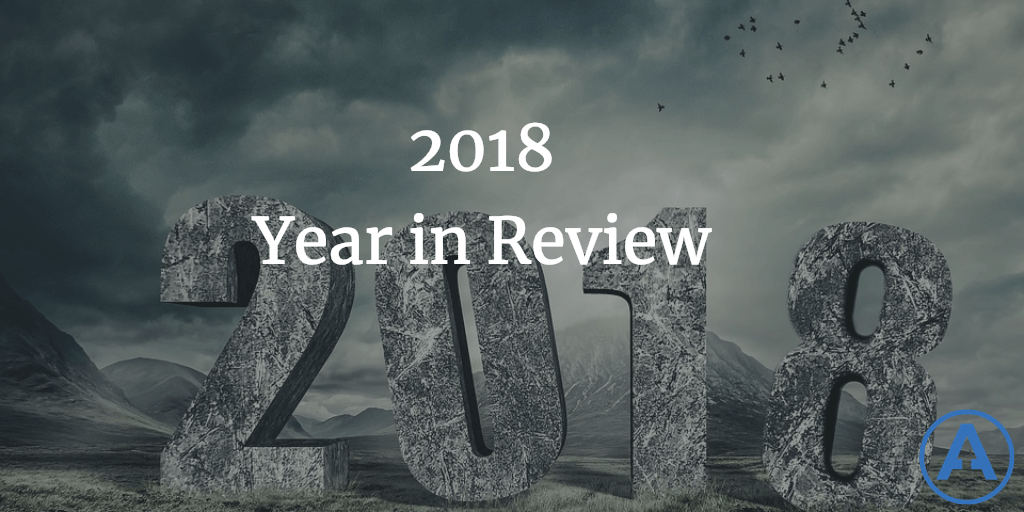 Now that 2018's been over for a few weeks, I've had a chance to compile some data from a variety of sources that I thought some people might find interesting, including future me. This post will include details on the traffic for my blog as well as other properties, how things are going with my podcast, where things are headed with devBetter, and a few other random bits.

Looking at the most popular articles in 2018, there were a mix of different categories of topics. I'm always surprised that some of the non-developer tips I publish continue to be among the most-read articles year after year. In 2018, here were the top 10:

Considering I mostly write about ASP.NET, ASP.NET Core, and C# stuff, it's interesting to me that only 3 of the most popular posts from last year are on these topics. Articles on solutions to common problems with git and NuGet both are very popular, as are some old tips I published on SQL Server and Excel topics (topics on which I don't expect to produce a lot more content).

I just sent my 144th weekly Wednesday developer tip email this week. I sent 52 of them in 2018, matching 52 the year before. I haven't missed a week since I started the newsletter in 2016. Sign up and you'll get one email each week at about 10am Eastern Time with a short tip I hope you'll find useful and a little information about the latest content on my blog, podcast, etc.

At the start of the year, I had 2755 subscribers, up from 2152 a year prior, a 28% increase which is obviously better than a decrease, but nothing to get too excited about. On the plus side, since MailChimp's prices go up with the subscriber count, at least it's not hitting a big price jump threshold, yet.

In 2018 I published 22 editions of my Weekly Dev Tips podcast. This is up from 2017 when I only published 14 episodes, but to be fair I didn't start until late in 2017. I need to get a little better about scheduling these if I want to come close to living up to the "weekly" name, and so far things aren't looking much better for 2019.

In speaking with a friend of mine recently, I learned that a growing number of people use YouTube as their podcast client. Thus, I've been convinced to start posting my Weekly Dev Tips episodes on YouTube in addition to on the podcast site. My hope is to include some animated notes as part of this process so the videos are not just a static image with the podcast audio. I set up the Weekly Dev Tips YouTube channel here if you want to subscribe. I don't have an ETA for when the episodes will start being published to it, yet.

I had barely begun streaming at twitch.tv/ardalis in 2018. I recorded about 3 videos, but my status didn't/doesn't let me retain them very long on twitch, so they're mostly all gone from that site. I'm cross-publishing them to YouTube (currently here but likely moving), which I expect to grow over time. As of right now I have 58 twitch followers and 110 YouTube subscribers.

Fitbit was nice enough to send me an email recently with my stats from 2018. Apparently it counted 3,514,933 steps for a total of about 1,668 miles walked last year. I don't have or can't find a similar email from them telling me what I did in 2017 so I have no idea how this compares.

I have no idea how many tweets I've posted but as of January 1st I was up to 11,107 followers. Craziness and again thanks for following.

GitHub says I had 624 contributions in 2018, down from over 1000 in 2017. My most popular repository is CleanArchitecture with 1.6k stars, a solution starter for building ASP.NET Core applications using clean architecture (aka onion architecture, ports and adapters, hexagonal, etc.). I'm also continuing to update and maintain Microsoft's reference architecture for monolithic ASP.NET Core apps, eShopOnWeb, which currently has 2.3k stars, along with the eBook that goes with it. I made a bunch of updates in 2018 and I'm continuing to do so this year.

In 2018 I launched a professional group mentoring program for developers interested in advancing their careers more quickly called devBetter. The program began with just one student who helped me get it off the ground and defined some of the initial details, and it's now grown to a few. The group of us are kind of a team focused on helping one another improve technical and soft skills as well as personal branding. I lead live Q&A sessions every week or two and we also have a private slack channel we use in between sessions. I'm hoping to grow it by 5-10x in 2019, and I have a bunch of ideas for ways I can help current and future members of the devBetter team. If this sounds interesting to you, check out devBetter.com.

I see a lot of other speakers listing how many talks they gave in a given year (and sometimes how many attendees they had, total, for the year) but I've never tracked this information. I know in 2018 I spoke at a bunch of conferences, including ones I've spoken at many times like Stir Trek, DogfoodCon, DevIntersection (spring and fall), and Codemash but also a couple of new ones like Momentum, KCDC, nopCommerce Days, and devUp. I think the only one I've left out of that list is QLTechCon, which I spoke at once previously. Looking back at my calendar I can figure out the total number of conferences and talks, which is definitely up from previous years (I'd intentionally slowed down on travel since my wife and I had twins in 2015). Let's see...

Ok, that looks like all of them. Not a HUGE number by any means but still a fair bit of travel and time off considering I don't have an employer paying me to go to these and usually they're at the expense of billable time. Despite this much travel as well as several client trips I still didn't fly enough to get status (so sad).

In addition, I helped organize and select topics for Stir Trek 2018 and helped manage the speaker mentor program for Codemash 2019 (which unfortunately I had to miss due to a client engagement).

That brings us to this year. Things are very busy for me at the moment, which is a good thing. I have a lot of content I'd like to get done in the first half of the year, including an update to my SOLID course on Pluralsight, an update to the eShopOnWeb eBook, a C# beginner eBook I've been working on that's nearly ready to publish, more streaming, and trying to get my podcast going on a weekly basis as well as pushing it to YouTube. All of that while keeping a bunch of clients happy and their teams improving and continuing to build up devBetter.

Thank for reading this and I hope your year is off to a good start. I'll try to post a similar update in a year or so, hopefully with more movement in positive directions for many of these metrics.