I've been the proud owner of a black Zune 30 for a couple of years now. I think it's great and I really don't foresee a need to get a Zune 80 since I've never come close to using the 30GB of space available, even when I've put a dozen or so movies on the thing. The upgrades in software have been nice, though I do miss the quick list feature that used to be there on the device.

Of course I noticed last week when, on New Year's Eve, my Zune wouldn't boot. A lot of discussion ensued and some resorted to dismantling their Zune to try and fix it. I opted to wait it out, expecting it was a date error related to its being the 366th day of the year, and it turns out that was a good plan. In any event, it turns out the issue was with a driver used by a component of the Zune, and not anything in the Zune software itself. Scott found and posted the relevant code, which makes the bug fairly obvious. ProgramPhases describes the bug in detail. In any event, the next day it worked fine again, and as that was the biggest issue I've had to date with my Zune, that doesn't seem too bad to me.

In terms of why I like my Zune, Jeff has a nice post describing how the Zune stacks up against the ipod. Personally I like the fact that it's cheaper, gets more frequent updates to the device's software (so it has a future), and has a built-in radio. When it was first introduced, the Zune 30's screen was also much larger and nicer than anything Apple had, though of course screen sizes today are larger still for any video device one might buy today. It's also worth mentioning that it has support for Audiobooks, though I haven't used this feature yet.

So, in general, I've been very pleased with my Zune. However, I do have a couple of features I'd love to see added to it.

Enable Wireless Sync Only When Charging 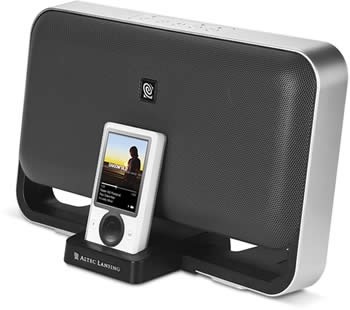 I'd like a setting that allows me to have wireless enabled only when the device is charging. I typically use my Zune in an Altec Lansing speaker dock like the one at right. I have wireless sync set up, but I don't normally leave wireless on for two reasons. The first is that when I do use it as a portable player, having wifi turned on drains the battery faster (though it still lasts many hours even if I forget). The second is one of my other feature requests.

I'd like a setting for Wireless that allows it to be enabled whenever power is detected. I think it would be good if it were smart enough to continue syncing for up to, say, 5 minutes if power is disabled and it's in the middle of a download, to ensure that it's able to wrap up anything it's in the middle of.

My second request is also related to wireless sync, and that is to do away with all modal dialogs surrounding wireless sync. If I turn on wireless sync while the device is in its dock playing music, and it decides to sync as it does periodically, it will stop playing music and once it's done, it will simply say “Sync Complete – OK” until someone physically walks up to it and presses a button. The fact that these speaker docks have remote controls is rendered useless by this “feature”, as the remote doesn't allow bypassing this dialog. I expect the device to sync. It's not an exceptional event to me. Just do it and quit telling me about it. If you really must, keep a log somewhere for geeks like me to go and look at if we really care, or if some users like having their device's use interrupted by annoying dialogs, make it an option to enable/disable said dialogs.

My last suggestion is not so much a Zune feature request, as it is a market that will open up if these features are done properly.

With these two features in place, it would make it possible to begin using a Zune as a permanent, in-car audio solution. Whenever it detects power (like when the car turns on), the Zune fires up. Its Wifi looks for the home network and, if found, syncs with it. If the user is simply leaving the garage, it may not manage to sync much before the car is out of range, however, on returning home, the network would be detected and assuming the “keep synching for N minutes after power is lost” option is enabled, the sync would happen even after the car is turned off and the driver has gone into the house.

Car companies seriously need to update their in-car components to support modern electronics. Something like this would be a major selling point, but only if it is modular and supports multiple MP3 players. Locking in to proprietary (whether a particular car manufacturer, or a particular device) formats is a bad plan, as cars tend to last 8-10 years or more and any given device will likely be outdated in 2 or 3 years. Simply use a standard like USB with adapters as needed, and do it in an agile fashion (that is, don't decide the details until the car is assembled, rather than 3 years in advance while it's being designed – things will change and delaying decisions saves money and delivers customer value).