If you're setting up new web sites and application pools in IIS on Windows Server 2008, it's likely they'll default to ApplicationPoolIdentity, like this:

This is all well and good, and for the most part you don't need to care about how this works behind the scenes or why it's different than the other bazillion different esoteric accounts you've had to know about over the last 10 years when setting up IIS for ASP.NET (IUSR_MACHINENAME, NETWORKSERVICE, IUSR, etc.). The most recent installment in IIS user best practices, before ApplicationPoolIdentity, was NETWORKSERVICE:

Got that? The NETWORKSERVICE account was low-privileged, so it was a best practice to use it. But unfortunately, since so many apps followed this practice, it became likely that NETWORKSERVICE would have too much access to a variety of applications/processes, so something new had to be used.

Enter Application Pool Identities. On IIS7.5 on Windows Server 2008 R2, your application pools will run with their own individual identity, each of which is actually a virtual accountcreated with the same name as your application pool. You may see these accounts in the ACLs for the files in your web site, and you'll need to know how to reference them yourself if you want to configure security settings for your site correctly (e.g. to allow users to upload files to your web application). They are not actually users or accounts, so they will not show up as a user in the Windows User Management Console.

For example, if you look at the Security settings for a particular filesystem object in your web application, you might see something like this: 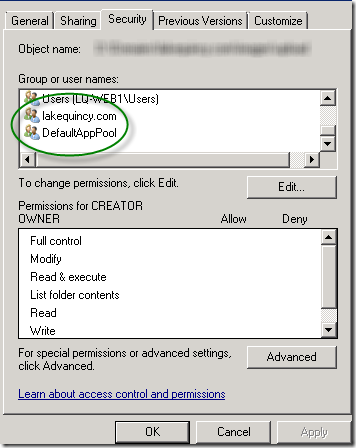 Note, though, that if you go looking for these users on the server, you won't find them. If you choose to change permissions by clicking Edit, then Add, then change the location to your server (if it defaults to a domain), then Advanced, and finally Find Now (yes, that's a lot of buttons), you WON'T SEE THESE ACCOUNTS: 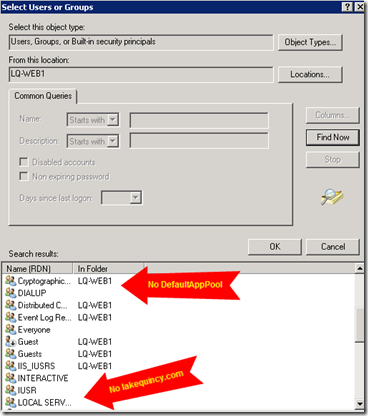 So where are they and how do you add them?

You have to know the secret, which is to prefix Application Pool Identities with

Thus to grant rights to the DefaultAppPool you need to use

If your application pool is named mywebsite.com, then your identity would be

When they appear in your ACL list, the IIS AppPool won't be listed. This is to ensure greater confusion on your part, because you don't have enough things to try and remember as a web developer and/or server administrator. If you type in the correct value and then click Check Names, it will remove the IIS AppPool prefix and underline the account name for you, like so: 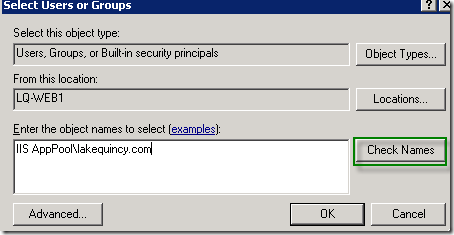 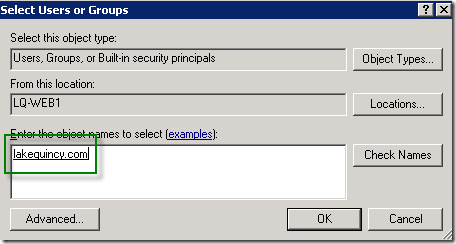 Hope this helps! For more info I suggest reading this article on Application Pool Identities.