So, 2009 is over. It was an interesting year, wasn't it? Talking to many of my friends and peers, especially entrepreneurs like other Regional Directors, I share a sense of relief that the year is behind us. We made it. For many, 2009 was a year with a lot of financial dread, and often loss. For me, the whole year was “ninjas on fire” – there never seemed time to take a breath, and it felt like I was having to run twice as fast just to stay in place.

In fact, the global economic dip is certainly not over, but I know many who are looking to 2010 with hope, whereas a year ago nobody was sure where the bottom would be in the financial crisis. Have a look at this interactive display of unemployment by county in the United States for an idea of how widespread the recession's impact has been, at least in this country.

Now if you look closely, in October 2009 there is a county in southwest North Dakota that has under 2% unemployment. If you really need work, you might want to pick up and head out there before your unemployed peers do.

But seriously, it's amazing to me how widespread the financial effects of this recession have been. I remember thinking in the summer of 2008 that if the housing bubble bursts, that would affect construction, real estate agents, and probably the banks and some people foolish enough to overpay for their houses, but it shouldn't affect me. It shouldn't have a major impact on Ohio, with its total lack of real estate bubble over the last 10 years. Sadly, we now know that the reach of the housing bubble (and other factors) spread far beyond the industries and individuals directly involved.

So why should 2010 be any better? Well, market indicators have been on the rise for quite some time. Here's a graph of the last year's indices from Google Finance:

Obviously, the time to buy would have been in late March, and it certainly looks like the last 3 quarters of 2009 were quite rosy, from this perspective. Of course, if you weren't fortunate enough to enter the market in March 2009, the 5-year outlook still doesn't look as rosy as it did in 2007:

Further, the Bureau of Labor Statistics is showing unemployment levels plateauing. They're not getting much better, yet, but again, there's hope. The bleeding at least is slowing down. One of my favorite quotes from my wife's veterinary school education is “All bleeding eventually stops.” In this case, I think that, as predicted by economists and policy-makers throughout 2009, unemployment numbers will eventually start to improve and follow other economic indicators' upward trends, but with a lag. 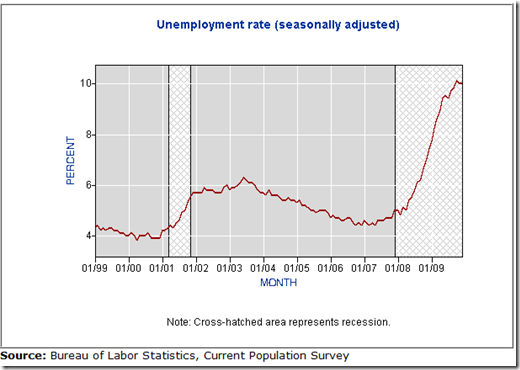 It's a Great Time To Be a Developer

I've never been happier to be writing software. We developers are truly in a unique position to change the world. I've been hearing about some of the very cool things my peers have accomplished in the last year, and plans for this year, and I'm excited. I'm also very excited to be back in a primarily technical role as a senior architect with The Code Project, after having to spend most of 2009 focused more on business than code. 2010 will see many great software releases and hardware advancements – I'm not going to try and predict anything specifically here, but trust me. And finally, businesses who cut too deeply last year are going to need someone to build that app that's going to beat their competitors. Innovation and competition aren't going anywhere. If you know your craft, are passionate about delivering quality software, and you can get things done, I don't think you'll have a problem staying employed or contracted this year (and if you fit these criteria and are in Northeast Ohio, I know people who may be hiring).