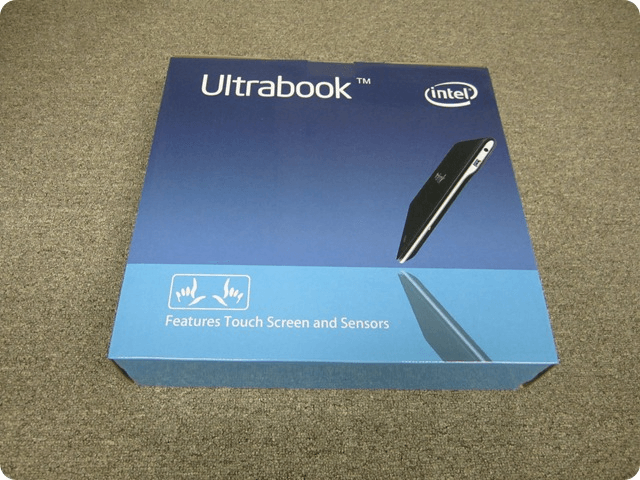 I recently received a preview-hardware next generation Ivy Bridge Ultrabook from Intel, optimized for and pre-installed with Windows 8. I suspect we’ll be seeing these available in stores and via online outlets soon. I’m a fan of the Ultrabook brand and concept – thin, sleek, and light, with powerful hardware capable of running developer tools. I’ve already happily switched away from much heavier and thicker laptops, so getting an early view of what’s coming next for this form factor is definitely exciting for me.

Before I get started, let me make two things clear. First, this is a pre-production device, which has known problems and is designed to help get feedback. If you’re a software developer, you know the difference (I hope) between something you’ve thrown together as a spike to see if it will work, and something that’s tested, polished, finished, and ready to ship to customers. This is more the former. Second, I received this device from Intel for free in order to solicit my impressions and review it here on my blog. These are my honest opinions, but I’m obligated to disclose the fact that I received this from Intel in accordance with the FTC’s Guides Concerning the Use of Endorsements and Testimonials in Advertising.

Now, let me show you what it looks like.

Here’s the product box. As you can see, it’s Intel-branded and called simply an Ultrabook here. It’s a clamshell-style notebook but includes a touch screen – more on that in a bit. 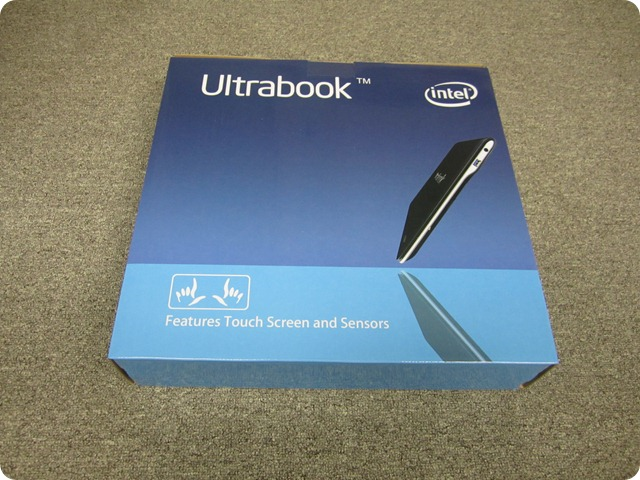 Inside, there’s the device itself, some shipping protection, and a cardboard box with accessories. 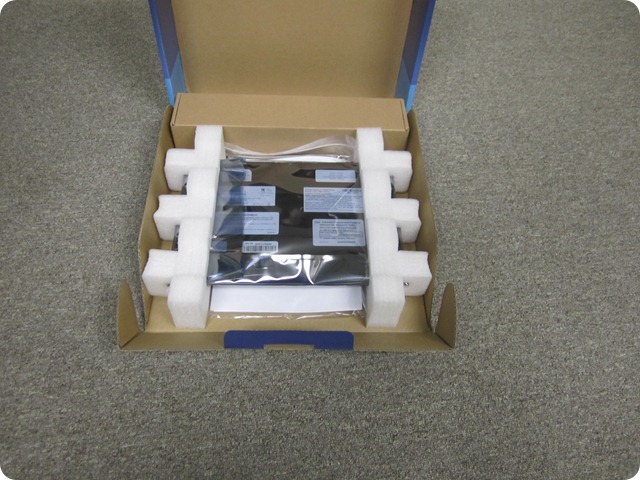 After opening everything, there’s the device, a power supply, some paperwork and release notes, and a USB flash drive with all of the device drivers needed for the machine. I thought this was a nice touch and I hope more OEMs go this route rather than including CDs/DVDs with such information (or failing to provide it). 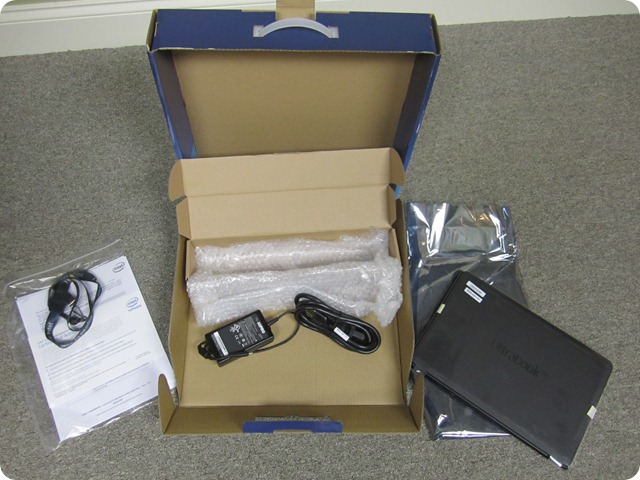 Here you can see the screen, keyboard, and touchpad. One thing I like about this layout compared to another Ultrabook I’ve used is that the power button (top) is not a part of the main keyboard (e.g. right next to the Del key), so you’re less likely to hit it accidentally. 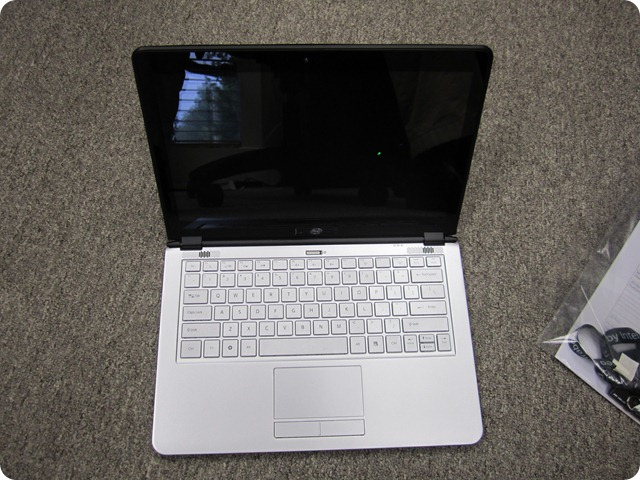 The back is simple, black, and made of some kind of rubberized material. It’s easy to grip and seems like it would be pretty durable, and also doesn’t show fingerprints. Another machine I use has a brushed metal finish, and while shinier does require more of a grip to avoid dropping it, so I can see this as being a nice benefit if you plan to carry it around without a sleeve or bag. 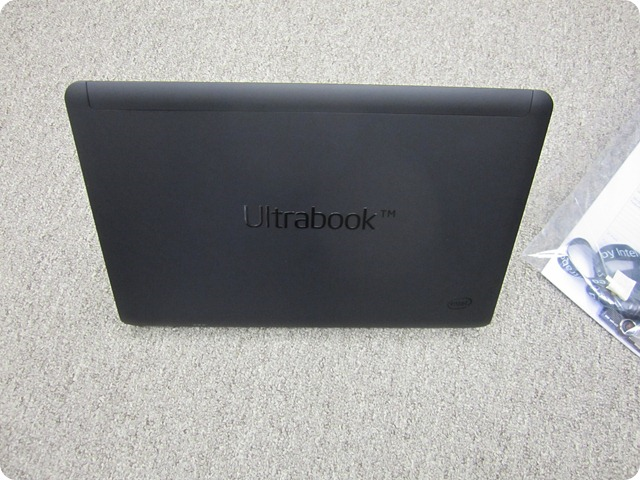 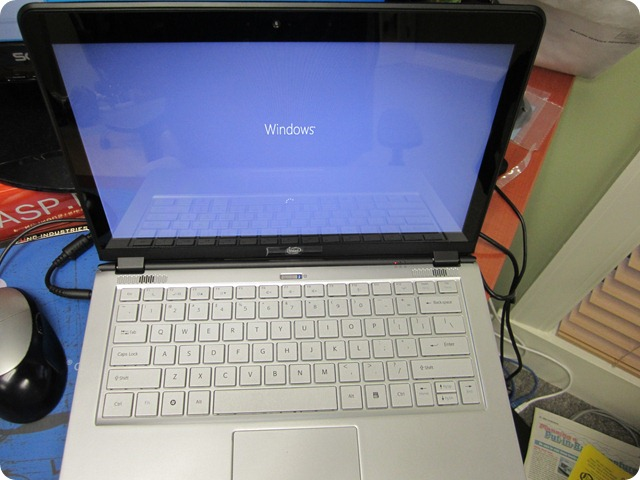 And finally, the Windows 8 start screen after first signing in.

Great, so we’ve seen that it’s a thin, light, laptop, and it has the new, shiny, Windows 8 OS. But what’s really new about this thing that makes it worth talking about versus the latest iteration of laptops? I mean, sure, it’s got the latest Intel Core i7 CPU (2 physical cores with hyperthreading, so appears as 4 cores), an HD webcam, and a 180GB SSD drive, but I’d say the coolest thing about this device is its inclusion of a host of sensors.

We’ll talk more about non-touch sensors in a later post. The point here is that there are a lot of them, and Windows 8 is designed to make it easy to take advantage of them and use them from within your apps.

Touch on a Laptop

Does a touch-screen even make sense on a laptop? It seems crazy, I know. I’m historically squarely in the camp of Programmers who don’t touch displays with their greasy fingers, but with the advent of touch screens,

I’m can see I’m going to have to give in on this one. Touching the screen that’s sitting a couple of inches from your hands (at the laptop keyboard) is a very natural thing to do, and for touch-enabled apps, certainly is the way to go over trying to use the touchpad in many cases. I quickly found it very natural to use touch from the Windows 8 start screen and within many touch apps. On the desktop, it’s still optimized for touchpad/mouse, in my opinion. However, I do agree with what Microsoft said at Build last year, which is something like “In 5 years, when we encounter a non-touch-enabled display, we’ll consider that a broken display.” I’m pretty sure they said it more eloquently at the event, but my search-engine-fu is failing me. But yes, now I find myself wanting to touch the screen on my other ultrabook. You know, the one with the non-touch screen that seems broken somehow now.

I haven’t had an opportunity to use the machine “in anger” yet, but so far apart from some minor (and known) issues, it’s working nicely. The overall form factor is one I’ve already been sold on, unlike some who still aren’t sure if they can give up their 10-lb beast laptops. There’s certainly enough power here to develop code on, or do other tasks like rendering video. Is it going to be as fast as a full tower gaming rig? No, of course not. But at 3 pounds that you can pull out on a plane or in a coffee shop to work on what you want, when you want, it’s a very liberating device. And unlike a slate, you can actually use it to produce content (like this blog post), since it has the best text-input device humans have yet to invent, a keyboard. I’m excited about what’s coming and am looking forward to seeing what the actual consumer-ready machines will have. In the next few weeks, I’ll be using this device to present at DevReach in Bulgaria, as well as for development at my local software craftsmanship user group, and hopefully I’ll find some time to play with the Windows 8 SDK and build something that uses some of the sensors that come with it.

A few other bloggers have also reviewed this device – check them out if you’d like to learn more: