Al Pascual wrote about some trends he noticed using Google Trend, with regard to different programming languages. It’s an interesting tool, since it can be used to gauge general interest in particular keywords and search terms, as well as news, going back about 4 years. For instance, here’s a comparison of Visual Basic and C# using common search terms for each (VB, VB.NET vs. C#, CSharp): 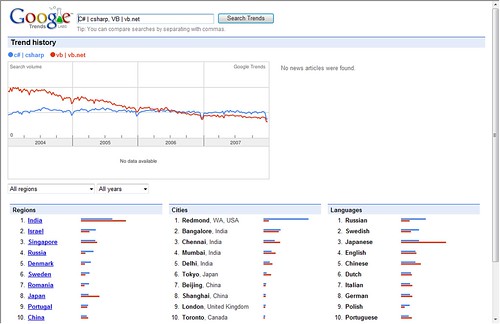 Given just these search terms, it’s clear that VB/VB.NET is on a downward trend, with C#/CSharp passing it in mid-2006. Expand this a bit further to include “visual basic” and “c #” and “c sharp” and you get the following: 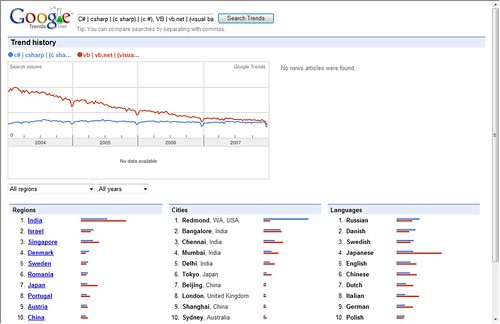 Visual Basic is still a huge search term in its own right (non-abbreviated), and you can see that it retains (barely) the more popular position over the C# search terms. The trend for VB seems pretty obvious, though, but there’s no inverse trend among the C# terms, so where are the VB searchers going? Are they getting up-to-speed and not needing to search as often? Surely if this represented a massive shift from VB to C# there would be more of a relationship between the two graphs, with the C# searches increasing as the VB searches declined.

What about some other recent developments, like AJAX, Silverlight, and most recent for ASP.NET buzzwords, MVC? The graph shows pretty clearly when these technologies came into play: 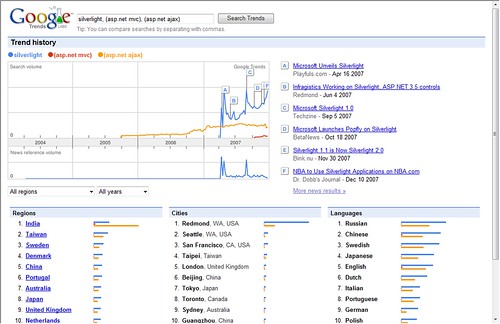 ASP.NET AJAX first started to be searched for in October 2005. Silverlight in April 2007. ASP.NET MVC in October 2007. You can see Silverlight interest has spiked a bit around certain release dates, as you would expect, and overall interest is on the rise. It’s also interesting that Silverlight is much more popular (as a search term) than ASP.NET AJAX, despite there being far more adoption of the latter.

For one last graph, let’s look at how Microsoft’s code names play into things. MS AJAX was originally called “Atlas,” though it had a very quick release cycle and so didn’t keep this name for a very long time. This is reflected in the graph below, pitting (asp.net ajax) against (asp.net atlas): 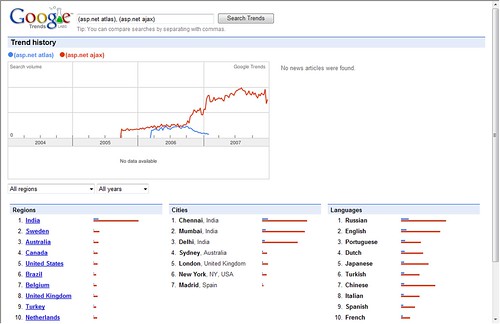 Here you can see that Atlas was first announced around March of 2006, about six months after folks began talking about AJAX in relation to ASP.NET. You can see that the ASP.NET AJAX official name occurred in the last quarter of 2006, and within about 4 months discussion of Atlas ceased and popularity of ASP.NET AJAX shot up dramatically.

Clearly you can learn some interesting things from this tool. For instance, if you were preparing to market a product, it would be worthwhile to know if there were much demand for it in terms of people searching for keywords relating to that product (or service). Equally important would be to learn whether that demand were climbing or on the decline, all of which could be found within a few moments using Google Trends.