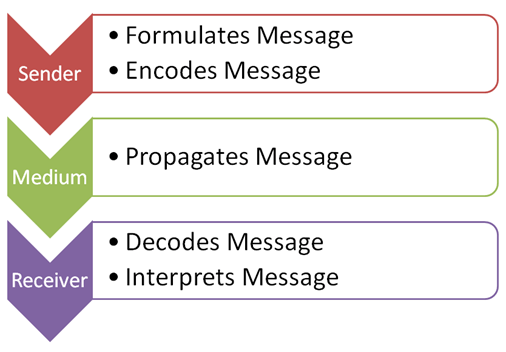 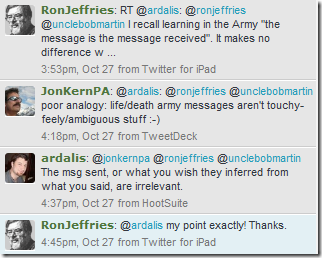 I did a quick search to see if I could find a reference that uses the nugget of knowledge that I recall from the course, and was unsuccessful.  Here’s a super-brief communications 101 lesson from what I recall:

Communication involves at least two parties.  When there are only two, we can consider them at any point in time the sender and the receiver.  When there are more than two parties, typically the only difference is in the number of receivers, and each one can be treated as an individual sender-receiver pairing.  The message must travel from sender to recipient through the medium.  The loss of detail from the intent the sender wishes to convey can be referred to as degradation of signal. 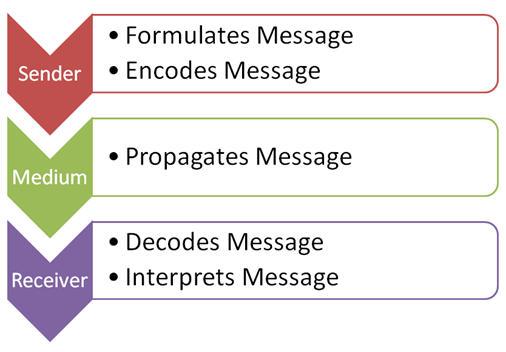 The sender has a message they wish to convey.  The purpose of the message is to elicit some kind of a response from the receiver – some change in behavior.  It is not always the case that the sender expects an actual message or any kind of direct feedback from the receiver, but if they didn’t expect any change at all in the behavior of the receiver, there would be no point in sending the message.

The sender encodes the message.  At a bare minimum, the sender must encode their intent into natural language, body language, etc.  In a face-to-face conversation, the selection of words, tone of voice, facial expression, etc. are all included in the encoding of the message by the sender.  Depending on the medium, the encoding might include written language and punctuation, encryption, binary transformations, compression, etc., many of which may be done transparently by the technology used in the process.  There is nearly always a loss in signal associated with the sender’s encoding process.  The best communicators are able to express their intent clearly and consistently.  Certain forms of communication, such as text-only, lose a great deal of the signal that the sender had prior to encoding the message.

The medium propagates the message.  In many cases, some loss of signal or degradation occurs during this step.  Even in a face-to-face conversation, background noise or other distractions can introduce potential loss at this step.  Background noise in telephone and radio communication, dropped packets in video communication, etc. are examples of loss that can occur during this step in the process.

The receiver decodes the message.  At a technological level, this often involves simply undoing each encoding that was done on the sender’s end.  Decryption, demodulation, conversion from digital back to analog, etc. are all parts of the decoding process at a technical level.  The receiver also mentally decodes the message – what they think they saw and heard.

Now, imagine that a third party is able to intercept the message in the medium, change it, and send it on to the receiver.  The receiver’s actions will then be changed, as a result of the new information they will decode and interpret.

Imagine instead that the medium drops all messages sent by the sender.  Will the receiver’s behavior now be affected by these messages at all?  Of course not.

Can we imagine a scenario in which the receiver acts directly on the intent of the sender, without decoding and interpreting the messages received from the sender?  Not without introducing the notion of mind-reading (and even then, who’s to say the receiver will correctly interpret the thoughts of the sender?).