I'm fortunate enough to live on the shore of a small lake, Lake Quincy, which I'm responsible for maintaining. One of the things I love about Ohio, and our location in particular, is that it's so easy to shift from urban to suburban to rural living. For instance, where we live is in a township, not a city, so among other things we have the potential benefit of avoiding city income tax (unless we work in a city, which at the moment we do – Hudson). However, we're surrounded by cities like Kent, Streetsboro, Hudson, and Stow. If we want to go to the store, order a pizza, go to a restaurant, or do anything else that requires civilization, all of these cities are within 10 minutes of our house. Bigger cities (with airport and parking garages) are within 45 minutes' drive. All in all, it's not a bad location, although I'd be happier if it also included mountains, ocean beaches, and summers that were twice as long (with no increase in cost of living). I'll keep dreaming, and maybe if global warming lives up to its promise the oceans will rise and Ohio will be a coastal state… but I digress.

(By the way, if you subscribe to my blog for its amazing and cutting-edge technical content and keen insights into software craftsmanship, you may be disappointed to learn that this post is not going to spend any time on such things.)

Getting back to the topic at hand, lakes require some maintenance to keep them healthy. Since moving here in 2005, we've consulted ODNR and they've advised us on a number of considerations with regard to keeping Lake Quincy healthy. Chief among these is controlling the amount of vegetation in the lake, as excessive amounts of algae, duckweed, or just plain weeds can all be detrimental to the ecosystem, in addition to being rather ugly to look at. One relatively simple way to control vegetation is through the use of non-toxic chemicals like Aquashade, which we apply a small amount of each spring. This makes a huge difference, but needs to be done before April 1st we've found, as much later results in a lot of weeds already having grown tall enough to get the light they need. 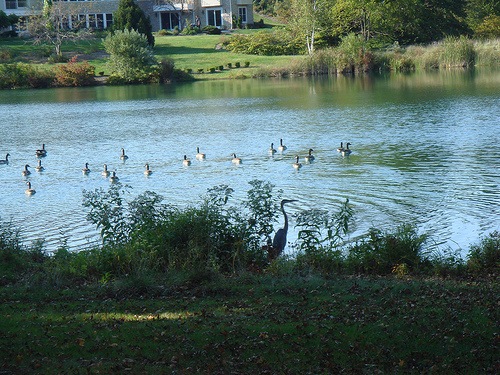 Keeping plants in check requires other measures as well. Although ours is not the only grass that borders the lake, we've avoided fertilizing the lawn in order to cut down on fertilizer runoff, and have left a buffer of natural area around the lake which is not mowed. The latter has the effect of allowing larger plants to grow, which provides a better filter for runoff, and also makes the shoreline less attractive to geese, which can be extremely detrimental in large numbers to the lake's health. The final measure, of course, is fish.

Lake Quincy already contained White Amur when we moved here. These fish are a kind of carp originally found in the Amur river in China. In some areas of the United States I have heard that they've multiplied to the point where they've edged out indigenous fish and flora. Thus, when purchased, they are sterile. The plus side of this of course is that there's no risk of them taking over the lake and destroying the ecosystem. The down side is that the fish need to be replenished on some kind of schedule. Amur are fairly long-lived, and can grow to be several feet in length, though older fish are less voracious eaters than younger, still growing, fish. The previous owner said he put in about 20 Amur at one point about 5 years before we bought our home, and after doing some research we decided that rather than adding a whole bunch of them infrequently, we would just add a few each year. Amur are basically cows, eating all kinds of vegetation, including grass clippings and low-hanging leaves from trees. It's important not to unbalance the ecosystem, and the current minimal number of sterile fish we are adding each year seems to work well in our situation. 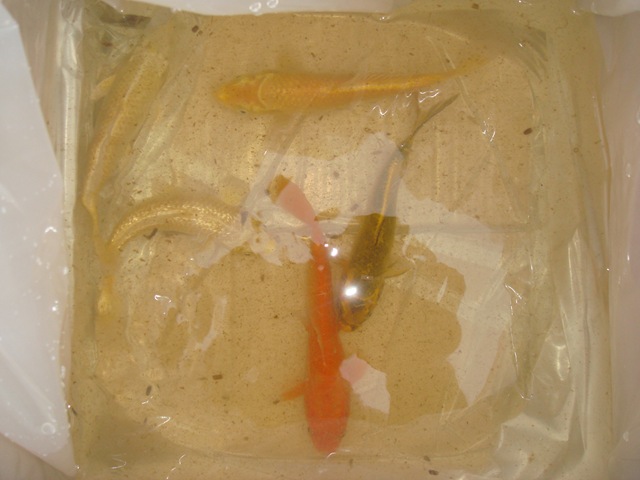 In addition to the Amur, we started adding Koi in order to control the duckweed on the surface of the lake. Duckweed looks like little bright green circles, and Amur don't do anything to control it. Koi, however, will eat duckweed, though it's certainly not the only thing they eat, either (so if there's plenty of other food, the Koi may not eat all of the duckweed). Koi tend to be brightly colored and whether for this reason or because they're tasty, herons seem to really enjoy fishing for Koi, so it's best to get a few extra if you know you have herons around (as we do). They're much more tame than the Amur, who are quick to get out of dodge if they spot you near them on shore or in a boat. Again, it's important not to add too many of such fish, as they can cause more harm than good. Lake Quincy has only a few of these fish. 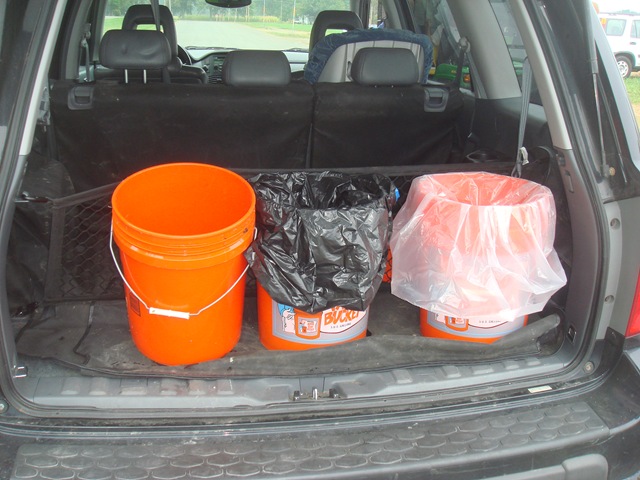 Picking up fish involves driving twenty minutes or so out into the country from Kent into Randolph, to the county fairgrounds, where the local fish nursery parks their fish truck and sells the fish each fall. Having placed an order in advance, you simply arrive with 5 gallon buckets line with plastic bags and already partially full of water from the lake or pond where the fish are ultimately going. The purchased fish are only about 6 to 8 inches long, but if they survive long enough (herons, etc) they'll grow to several times that size. 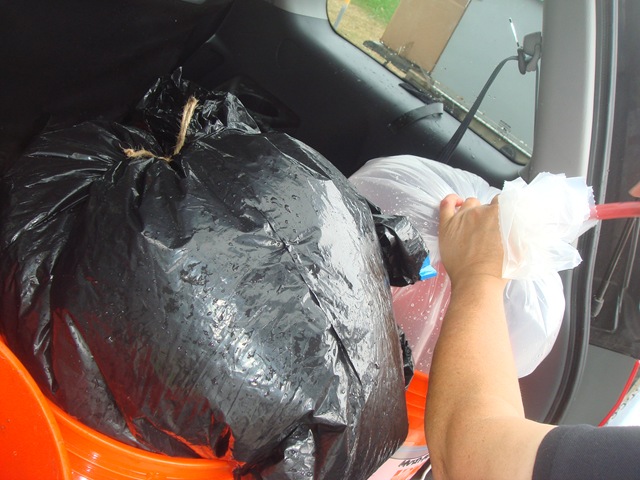 Once the fish are transferred into your buckets, the bags are tied shut and inflated with extra air so that the fish will have enough oxygen to last them the trip to their new home. The whole process only takes a few minutes, and it's pretty much like a drive-thru lane as each vehicle drives up to the truck, gets their fish, and drives off. The fish truck is actually pretty cool and not something you'd see too often in daily life (I took a picture of it this year to include in this blog post). 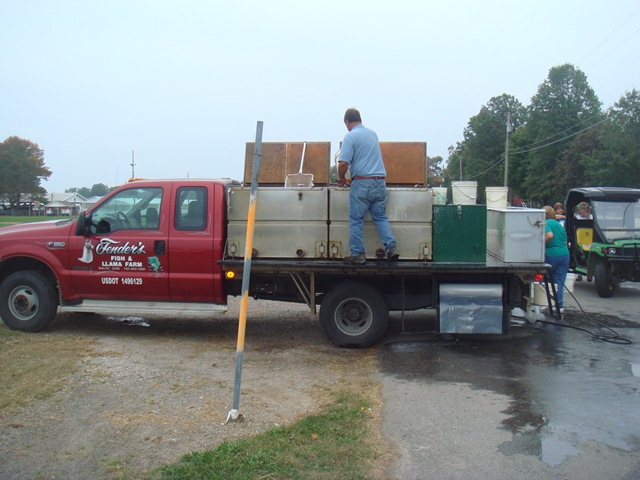 Back at the lake, it's a simple matter to untie the bags and pour the fish in, where they become a part of the lake ecosystem and help keep the vegetation in check (and providing a few more meals to the local heron population as well). Just as in software, small incremental changes with tight feedback loops are the best way to correct problems with natural systems. Additionally and specifically relating to pond and lake vegetation, my research and experience indicate that most of the time the underlying issue is too much nitrogen and phosphorous entering the water. Treating the vegetation without treating the source(s) of these chemicals is only addressing the symptoms, not the root cause of the problem (more on this).