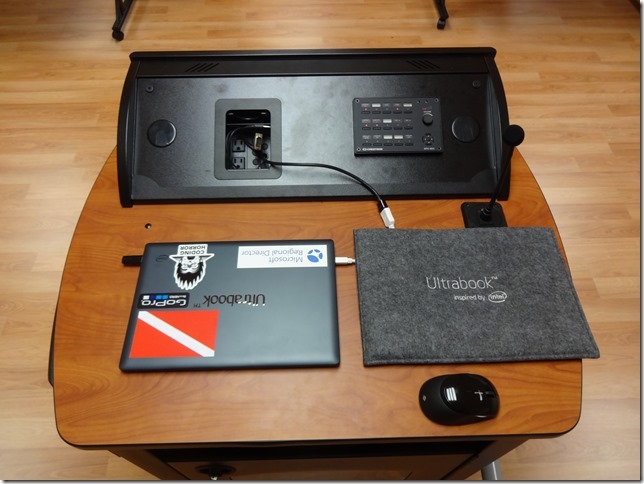 I've been using my Intel Haswell Ultrabook for about a month now, so it's time to follow up on my first impressions review.

Last month I was happy to receive an Intel Haswell Ultrabook Software Developer Preview device, for review purposes. This unit is actually the 3rd Ultrabook I've used, and certainly it is the best of the three. The first one, an Asus Zen I got in early 2012, continues to serve me well when I use it, but I was never a great fan of the keyboard or track pad. It also lacked a touch screen. Last year, Intel sent me a review unit based on their 3rd generation Ivy Bridge tech. That unit had a very nice touch screen as well as a host of sensors, but the unit itself was very obviously pre-release quality. With the review unit Intel sent this time, they've really stepped things up. This feels like a production quality fit-for-consumer device, from the packaging to the hardware itself.

I haven't had to travel far with the device yet, so no reports of how it performs on an airplane, but it has been nice to not have to worry about plugging in particularly much during the day when going to and from meetings. Also, the instant on/off is very nice. With 4GB of ram, it's been fine for use with Outlook + Visual Studio 2012 running, and the SSD is large enough that so far it's nowhere near at risk of filling up. Like any developer, I would prefer a dev machine with more RAM, but honestly so far it's been quite sufficient (and I don't typically run multiple VMs on my laptop, so there's that).

As a developer, one of my primary complaints about many Ultrabook models available today is the screen resolution. Many of them max out at 1600x900, which is smaller than I'm looking for. Personally, I hate the whole HD video push the television and movie industry has been pushing for the last decade, since before that took place I could actually find 1600x1200 resolution monitors and laptops pretty easily. Now, screens are 25% smaller but are marketed as “Widescreen” and “HD” as if that's some kind of improvement. Not so with this Ultrabook – it features 1920x1080 resolution (which is actually more pixels than 1600x1200).

Couple that with a modern projector and you can actually present at this native resolution. Here's a (poorly lit) example of doing so in the new Telerik Training Center in Hudson: 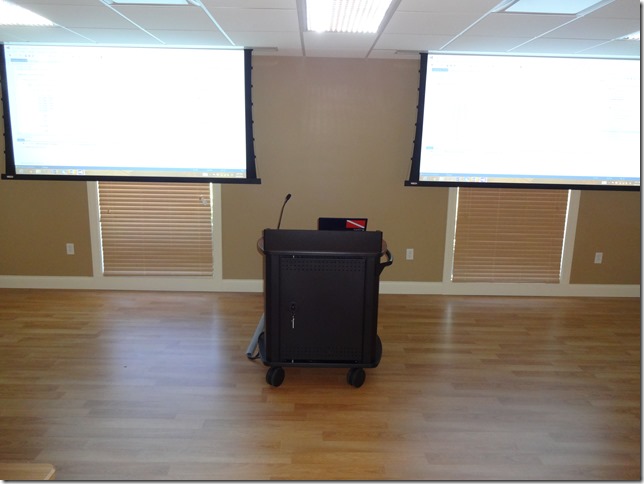 Another minor complaint about the Ivy Bridge Ultrabook was that it only had a mini-HDMI port, and no adapter. The Haswell device has a very small video port (microHDMI), but shipped with adapters for HDMI and VGA, so hooking up to a projector is a breeze. Here's my setup on the lectern (and current array of laptop stickers): 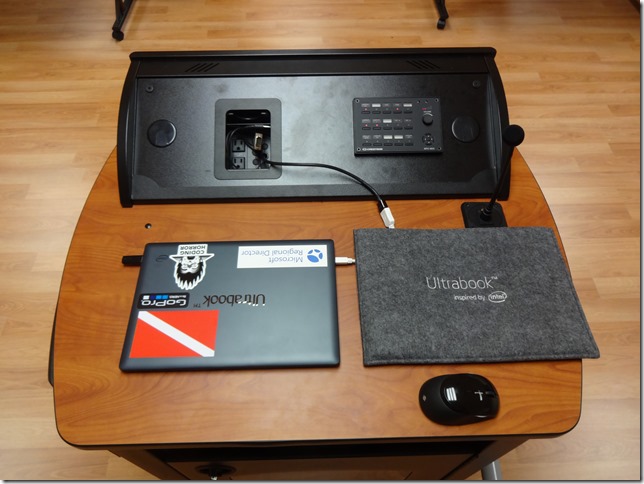 Being able to present in my native resolution is very nice (though I realize this is as much a feature of the projector as the laptop). Also, the travel sleeve has proven to be very handy, and is another example of improved fit-and-finish of this unit over last year's device.

The Haswell device ships with a bunch of sensors that you can interact with from your applications. Here's a screenshot from Device Manager: 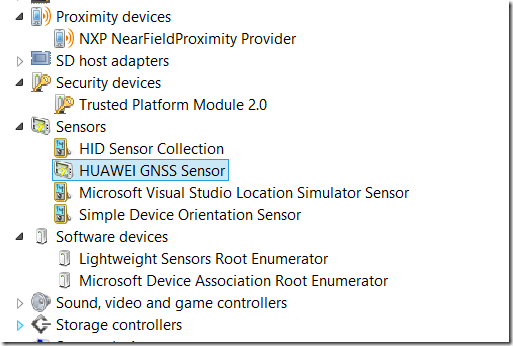 If I have some time, I'll try to show off some code that interacts with the sensor suite next month when I write another follow-up to this review (which should also be after I travel to Bulgaria and back for DevReach – wondering if I can make it there on a single battery charge). Also note that it will support a SIM data card, which unfortunately I don't have or wish to invest in, but if you're looking for go-everywhere connectivity, this device can support it.

I've been primarily using the Ultrabook for email and light software development since I received it a month ago and it's been fantastic for these purposes. The Ultrabook is lightweight, the batter lasts and lasts, and the fit and finish of the unit is great. In addition, it's been perfectly good for streaming Amazon Prime video in the evening, again with great battery life (and reasonable speakers).

You can read a couple of other reviews of this hardware, if interested:

Disclosure of Material Connection: I received one or more of the products or services mentioned above for free in the hope that I would mention it on my blog. Regardless, I only recommend products or services I use personally and believe my readers will enjoy. I am disclosing this in accordance with the Federal Trade Commission's 16 CFR, Part 255: “Guides Concerning the Use of Endorsements and Testimonials in Advertising.