Guard Clauses and Exceptions or Validation? 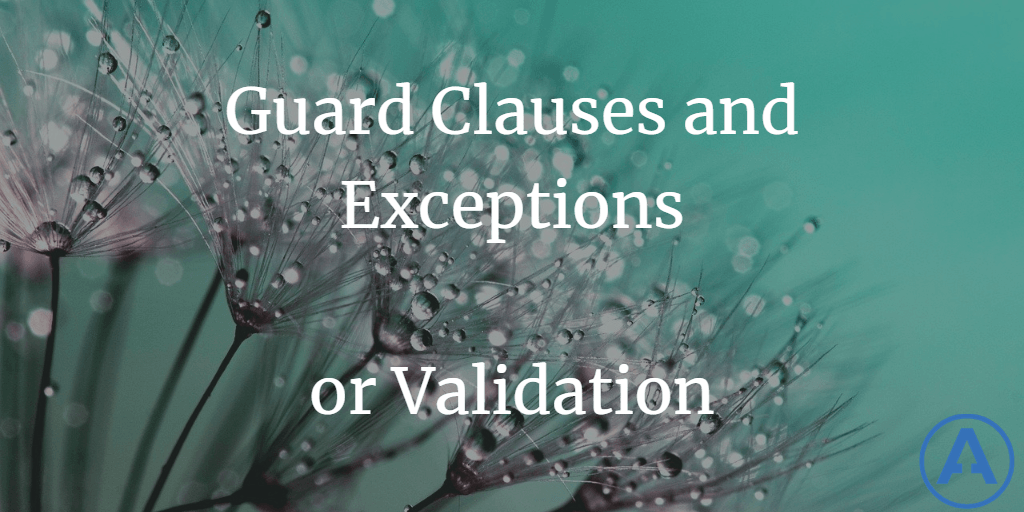 Guard Clauses provide an elegant way to ensure code inputs are valid, typically by throwing exceptions. Validation provides a solution to a similar problem, typically without the use of exceptions. When does it make sense to use each of these techniques?

This article is a response to a question I received from one of my tips newsletter subscribers, Chad Boettcher. He asked:

I just have a quick question – well, I have many questions, but I’ll start with this one: I’m implementing several value objects and I’m torn between using Guard clauses for validation vs returning an Ardalis.Result. One thing that I haven’t seen any example of is checking for the max string length in the various fields so I find myself wanting to using the result with all of the validation errors returned in the result rather than throwing an exception for each field so that the user gets all of the validation errors at once rather than one at a time...

I answered Chad via email, but he gave me permission to share his question and name so I could credit him when I wrote up a more detailed answer in this article.

What is a Guard Clause?

A guard clause is just a technique for failing fast in a method, especially in a constructor. If a method (or object instance) requires certain values in order to function properly, and there's no way the system should ever try call the code with invalid inputs, then an exception-throwing guard clause makes sense.

Code without a guard clause:

Obviously this code will fail with a null or empty string, as well as strings that aren't at least 13 characters long. You can address this problem with a try/catch:

While this can work, it doesn't help you to identify where the errant code is that is allowing the call with the invalid input.

The big problem with this one is how verbose it is. And it only gets worse with more than one parameter to check. To convert it to use guard clauses, simply invert the if statements and eliminate the else clauses.

If you want a standard way to work with guard clauses in your app, check out my nuget package, Ardalis.GuardClauses, which have over 3M downloads as I'm writing this.

We just saw how guard clauses work. They allow execution in methods to fail fast by immediately exiting (with an exception) when a problem is detected. This is appropriate for conditions that should never happen under normal circumstances in your code. In the example above, other code should already have ensured that the input string existed and was valid prior to the method in question being executed. By the time the application got to the point where it was ready to call the DoSomething method, the expectation is that it has everything it needs to do so. If it doesn't, something has gone terribly wrong and the application should not try to continue. It should abort the current operation, log the exception, and present the user with some friendly error message (and hopefully notify the dev team that there's a problem that must be addressed).

Validation is used to help prevent the inadvertent or malicious input of invalid data into the system. In many cases, to improve the user experience, it makes sense to validate a large number of data value, one by one and perhaps collectively, and then present the user with all cases of invalid data in a single operation. This is the opposite of the "fail fast" approach of guard clauses, and exceptions are not well-suited to this use case.

Can you use exceptions (and potentially guard clauses) to perform validation? Yes, of course, and I'm sure many system do so. But it shouldn't be your first choice for the reasons set forth here:

I'm a big fan of the FluentValidation library, and it's my preferred way of dealing with validation that goes beyond the basic ASP.NET MVC model validation support (as well as validation that belongs in your DDD domain model).

What about partially created types from caught exceptions

Chad also pointed out a potential problem when writing code like this in a constructor:

Ardalis.GuardClauses supports direct assignment from guard clauses, as shown in the listing above. Alternately, you can check each input, and then assign it, but that's more code:

In the first scenario, it might be possible to produce an instance of Customer with no LastName but otherwise correctly created:

It's worth pointing out that one could apply the same try/catch statement to a type that does all of the checks first, and then the assignments, with the only difference being that no fields will have been assigned. I'm not sure that's that much better. But in any case, don't do this. There's no (good) reason to ignore the explicit guard clauses in the constructor of a type in your production code. I could imagine maybe someone would need this in a test scenario, but I would suggest any number of alternatives before this one. Use a mock. Use a fake. Create an alternate constructor. Use reflection to set the state of a valid instance of the object. But don't ignore constructor exceptions and expect to have a valid object instance as a result.