GiveCamps Get a new Sponsor

If you haven’t heard of Give Camps before, they’re a way for developers to give back to local charities and non-profits by providing their services over the course of a weekend. GiveCamp was an idea hatched by Chris Koenig, a Developer Evangelist for Microsoft, a few years ago and now there are many GiveCamps organized around the country, including several in the Ohio-Michigan area (Ann Arbor GiveCamp,Columbus GiveCamp,Lansing GiveCamp,Grand Rapids GiveCamp).

In addition to developers, a GiveCamp also needs organizers, volunteers, and sponsors. If you’d like to help out or start your own GiveCamp,there’s a nice Cookbook describing what’s involved in putting one together on the GiveCamp site. A GiveCamp doesn’t have to be tied to any particular technology, and developers from a variety of backgrounds and with some diversity in skillset can join together to help their local community organizations.

GiveCamp also has a number of partners and sponsors that can help ensure the success of the project. The newest partner is DiscountASP.NET, who have agreed to offer free website hosting to all charities and non-profits that participate in a GiveCamp event. Other partners includeTelerik, whose Sitefinity CMS is a flexible ASP.NET-based platform that can be used as a basis for many organization’s sites, and Telligent, whose Graffiti CMS and Community Server products can provide an online community experience. SAAS MADE EASYandMicrosoft round out the current list of CodeCamp Partners 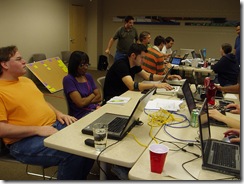 Flickr has a bunch of photos relating to GiveCamp if you want to see what it’s all about.