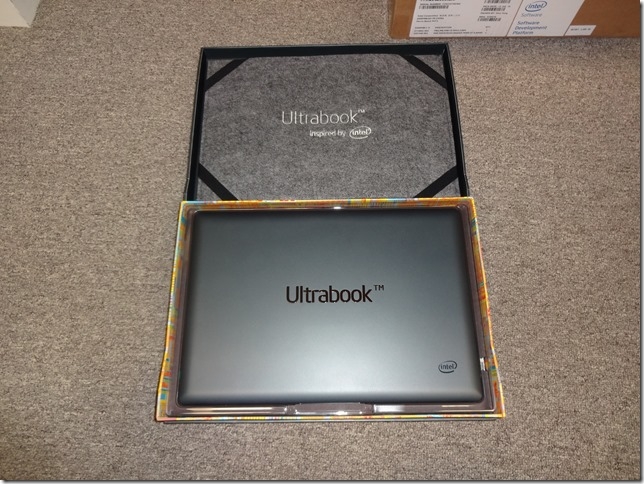 I was on vacation last week, and spent most of Monday driving home. When I got there, I found that a nice present had arrived: a new Intel 4th generation Haswell Ultrabook for me to review. If you haven’t heard about the latest generation of Intel processors, The Verge covered them in June.

Last year, I reviewed a prototype Ultrabook that used Intel’s “Ivy Bridge” generation chipset. You can check out that series of reviews here:

For the current, 4th generation Haswell chips, the emphasis is on battery life, at least for the mobile processors. This particular Ultrabook includes the 4350U chipset: 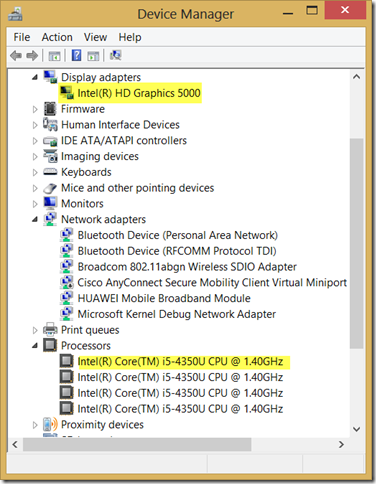 The U suffice denotes Ultra-low power consumption. Here’s a rundown of the Haswell chips and their respective specifications. But I’m getting ahead of myself – let’s take a look at the Ultrabook as I received it.

In the shipping box is, of course, another box, holding the Ultrabook. 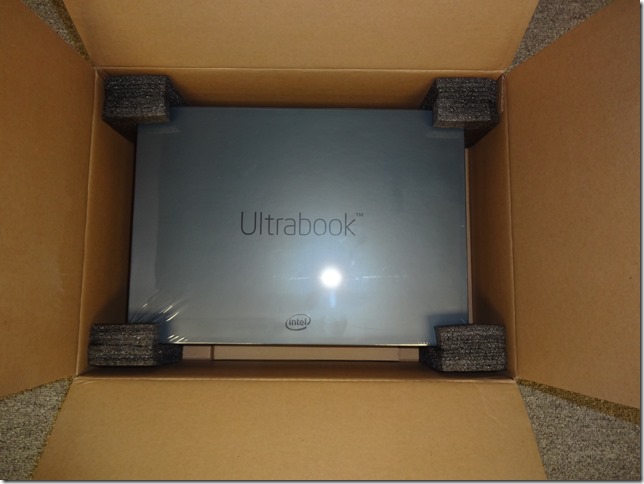 Opening that box, reveals the unit itself. 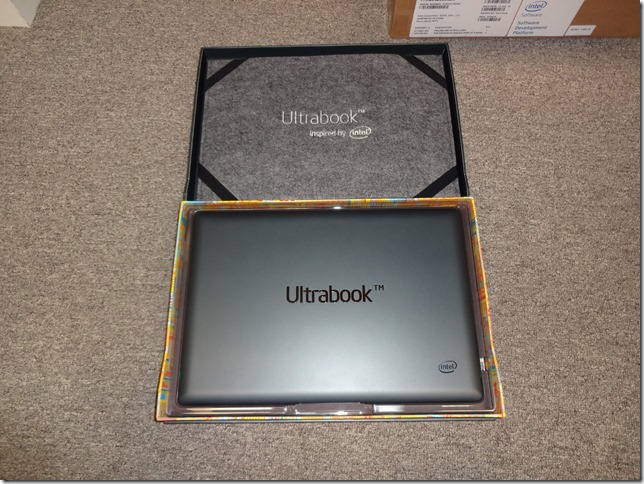 One surprise when getting to this point, is a relatively loud Intel jingle that plays when the box is opened – like many greeting cards with the built in sound. At first, I thought perhaps they’d configured the laptop to start up when the lid opens, but actually there’s a small optical sensor inside the box that plays the sound whenever the light level goes from dark to light. Here’s a video with the sound (apologies for the background noise):

Here’s a picture of the light sensor/speaker gadget: 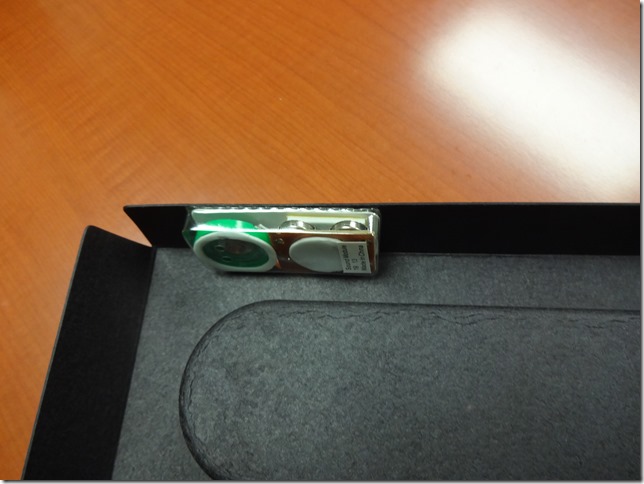 Now, let’s look at what comes in the box (apart from the Intel-jingle-playing-toy) [click to enlarge]: 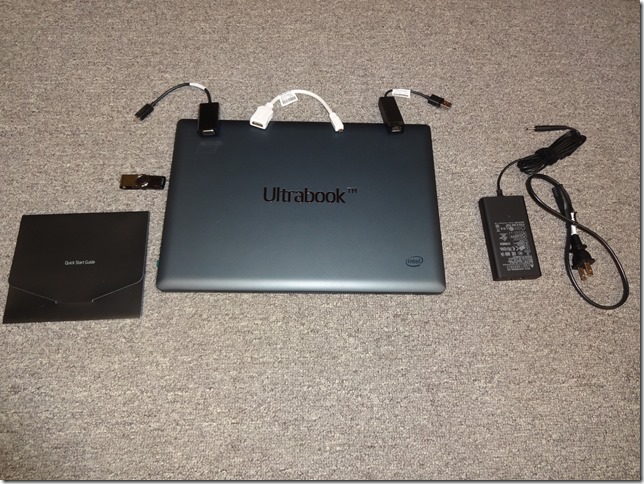 We the Ultrabook, which of course we’ll talk about in a moment, as well as a few helpful accessories. There’s a VGA adapter, an HDMI adapter, and an Ethernet adapter, all of which are very helpful (last year’s Ivy Bridge Ultrabook didn’t come so well-equipped, so this was appreciated). The power supply, on the right, is tiny. The cords are super thin and light, and the “brick” – if it’s even fair to call it that – is smaller and lighter than most cell phones. The box also includes a thick felt sleeve, shown in the second photo above and embroidered with the Ultrabook logo. At first I thought that was just padding in the box to protect the unit during shipment, but it has actually been a handy sleeve to use when transporting the Ultrabook in a laptop bag. There’s also a 16GB thumb drive with all of the drivers needed for the device, in case you need to pave it and reinstall the OS.

The unit also comes with a Quick Start Guide that shows off some of its features [click to enlarge]: 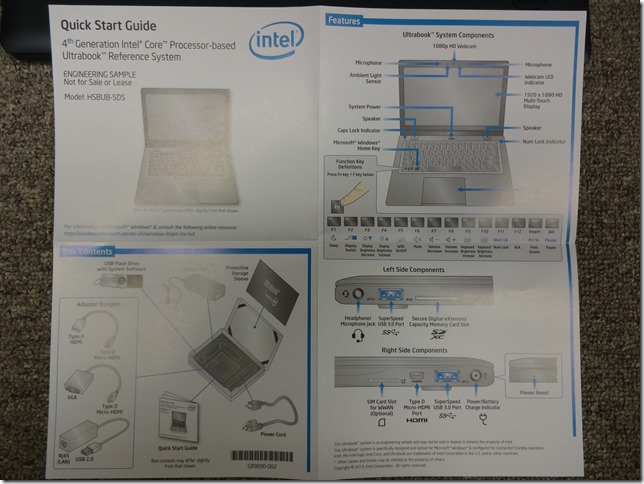 Looking at the quality of the device itself, it definitely has more fit and finish and attention to design details than the engineering review model I looked at last year. The case is very nicely designed, with some soft edge transitions along the sides. The keyboard is improved, as is the touchpad, which is also much larger than the previous one. The screen is beautiful and runs at 1920x1080 resolution by default, which is very nice. Even with that resolution, the screen has a fairly significant bezel – I’d be slightly happier if more of the screen real estate were put to use for the viewable screen – but that’s a very minor concern.

As for additional first impressions, the laptop runs very cool for the most part, and the battery life has thus far been excellent. In addition to lasting quite a while, it also charges very quickly. The time to sleep and wake are also both near-instant. If you’ve ever walked around with a laptop with the screen open, maybe from an office to a conference room, for instance, because you didn’t want to have to wait for the machine to sleep and then wake up, you can appreciate the speed with which this machine sleeps and wakes. It’s hard to time it accurately, because of the speed, but it’s certainly less than 2 seconds to sleep or wake up when the power button is pressed (you can also awaken it with the space bar, which is nice).

One minor issue in quiet rooms is the fan, which is a known/documented issue for this unit. It’s noticeably loud in a quiet room, and it changes speed frequently, which makes it more noticeable (presumably it

shifts speed to optimize power consumption). Again, a very minor concern, and one the producer is already aware of and would presumably correct for consumer-ready models.

I’ve only had the Haswell Ultrabook for a few days now, but I’ve been using it regularly and have installed all of my development and productivity tools. I’ll be using it as my primary non-desktop machine over the next few months, and will write up additional thoughts on it next month. You’ll find a few of my peers have also written up reviews of the same unit, if you’re interested in additional opinions.

Disclosure of Material Connection: I received one or more of the products or services mentioned above for free in the hope that I would mention it on my blog. Regardless, I only recommend products or services I use personally and believe my readers will enjoy. I am disclosing this in accordance with the Federal Trade Commission’s 16 CFR, Part 255: “Guides Concerning the Use of Endorsements and Testimonials in Advertising.