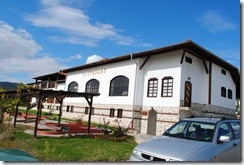 This past week I had the good fortune of traveling to Sofia, Bulgaria to speak at DevReach for the second time (the first was 2 years ago in 2008). This is a great conference and was held for the second year in a row at a movie theater, which worked very well (similar to StirTrek in Ohio each year). The event included a great list of speakers, including Scott Stanfield, Beth Massie, Andrew Brust, Donald Belcham, Stephen Forte, Lino Tadros, Miguel Castro, and Sahil Malik. Michelle was able to join me again this year, which worked out well since Telerik is one of her/NimblePros’ clients.

The conference was held at the Arena Kino (cinema), which you can see here from out my hotel window. It’s a very nice facility and I found it to be much better-suited for the event than the IX center where the conference was held in 2008. Inside, there’s a nice food court as well as very nice theaters with lots of room and stadium seating. The keynote room was big enough to hold all of the attendees (not sure how many that was – several hundred definitely).

I had two sessions this year. The first was on .NET Tips, Tricks, and Tools, a talk I’ve been giving for many years and which has been constantly evolving. I had a couple of minor issues with my demos that I wasn’t too happy with, and per usual I tried to cram in as much content into 75 minutes as I possibly could. In hindsight I think I probably would have better served the audience by cutting down the number of things I was covering and moving at a somewhat less frenetic pace, especially given that the English isn’t the first language of most in the audience (though the entire conference was in English, and the attendees’ English was generally excellent).

My second session I thought went much better than the Tips and Tricks talk, and this was on Anti Patterns and Worst Practices. I highlighted many of the Principles of Mediocre Programming that I’ve amassed on my blog, and told a few war stories from my own and others’ experience. I opted to stay out of Visual Studio for this talk, which when I gave it previously at TechEd I’d used to highlight some of the code-specific anti-patterns. Moving these into Powerpoint and using animation to draw attention to the problems and their solutions seemed to work much better. Thanks to Michelle for spending a few hours helping me tweak the format of this deck – I think she really improved it quite a bit.

One of the great things about the DevReach conference is the hospitality extended to speakers. Speakers at this conference are not paid, but Martin Kulov, who organizes the event, and Telerik, who sponsor it, do a great job of taking care of speakers. This includes organizing a cultural excursion day trip that follows the event. This year we visited a relatively new winery (see bottle at right) and some ancient Thracian ruins about a 2-hour bus trip from Sofia.

The winery is built around an underground wine temple that is modeled after an ancient temple at the Thracian ruins’ site (unfortunately we didn’t get to go inside the ruins due to arriving somewhat late in the day – have to go back again some other time).

Having a day to spend with the speakers and event organizers on the bus was great, and Bulgaria really is a beautiful country. Here’s one of the views from the ruins site, which is a bit of a hike up the side of a mountain.

Thanks again to the conference organizers for a very enjoyable trip. I hope to be able to return next year.