I really hate repetition, especially useless repetition, in language. I guess I’ve been a follower of the DRY (Don’t Repeat Yourself) programming principle long before I knew about the acronym, but I tend to apply it in natural language as well, as much as I can. I’m a big fan of George Carlin, who shares my view on this. One of his bits goes into the overuse of the word “situation”, noting things like reporters saying “police are responding to an emergency situation”. No, they’re responding to an emergency. We know it’s a situation. Everything is a situation. Since I live in Ohio, one of our local speech oddities is the excessive use of the word “at”, especially when referring to where things are. While many people when looking for something might say “Where is it?” a typical midwesterner would say “Where’s it at?”. This of course makes little sense when you think about it – “it” isn’t “at” anywhere. Nonetheless, I sometimes find myself saying this phrase despite my dislike of it. 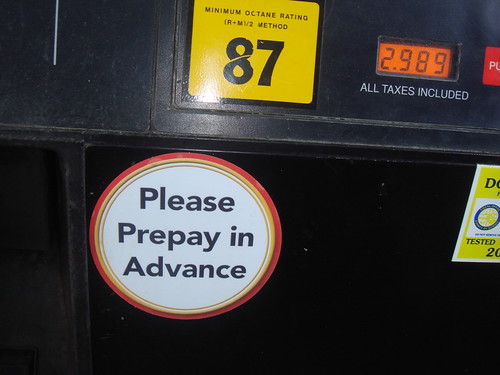 All that said, the purpose of this post, in addition to sharing some George Carlin humor, was to draw attention to this sign I was confronted with last week at the local gas station (look! gas for under $3!). This again draws to mind the same Carlin bit, wherein he talks about the language of airlines suggesting that one “preboard” the airplane. What, he wonders, can preboarding actually be? To get on the plane, before getting on the plane? (another favorite – “this program was prerecorded” – like they were going to record it after showing it?). So in this case, the gas station would like me to prepay. Well of course, that makes perfect sense, why not suggest to customers “Please prepay.” Or, if that sounds a bit too terse, or if prepay is too difficult of a concept, maybe the longer “Please pay in advance.” would suffice. I think most English speaking customers would be able to figure either one of those two sets of instructions out without great difficulty (but perhaps I’m overly optimistic about the average person’s intelligence). Oh no, some genius thought that these concepts would somehow convey the message with greater clarity if they were combined (and sadly they might even be correct), yielding “Please Prepay in Advance.”

Makes me want to prethrow up my lunch situation.