Like many others, I enjoy playing games in my short supply of free time. I used to be a bigtime PC gamer who scoffed at console gamers, but in the last few years the consoles have really caught up to the PCs in a lot of ways, and now I’m just about 100% an XBox360 gamer when it comes to video games (I still play the Starcraft occasionally, though). Luckily, my wife (mostly) shares my love of games, and is happy to play with me, though she prefers boardgames to video games.

We both think games are a great way to get to know people and build a sense of team, so at Lake Quincy Media we buy lunch for the whole company and play games during lunch, which usually turns into 2-3 hours as our company has grown and more players almost always translates into longer games. We also host a few game days each year, typically before a holiday, which are devoted to nothing but game playing and include invited guests as well. It’s a perk we enjoy and we think it helps us attract and retain some great people, even if we’re not in one of the most crowded and overpriced locations on the continent. (But seriously, Joel has some great ideas for how to build productive work spaces here).

But I digress – my point for this post is to itemize a few of the cooler games I’ve played in the last couple of months. Some of them were gifts I received, others I’ve simply played and are on my wish list.

(Amazon link) is a cool boardgame for 2-4 players that is at the same time fun, challenging, not too long to play or set up, and cooperative. It was out of print for a while in 2008 but apparently is available again (since I got it for Christmas). Since it’s cooperative, one could even play it solo and have a good time, as it’s by no means an easy game to win.

In Pandemic, each player takes on the role of a specialist as several virulent diseases begin to break out simultaneously all over the world. The team’s mission is to prevent a world-wide pandemic outbreak, and to achieve this goal they must balance treatment of existing outbreaks with time spent researching cures for the diseases. The available roles are Researcher, Scientist, Medic, Operations Expert, and Dispatcher, and each has a special skill. Some work very effectively in concert with one another, such as the Researcher/Scientist or the Dispatcher/Medic. In each game, only some of the roles are available, and each player has a random one.

The game also has several levels of difficulty achieved by inserting 4, 5, or 6 Epidemic! cards into the play deck. With 4, victory is straightforward but not guaranteed for experienced players (this is recommended for new players). With 5, victory is achievable, but difficult. I think my personal win margin is somewhere just shy of 50% at this level. With 6, things are just plain ugly. Michelle and I have tried this a couple of times and haven’t managed a win yet.

The beauty of this game is that players are cooperating, not competing, and teamwork is encouraged. Further, the game is well-designed in that most games will be close, so it’s never boring or unchallenging. 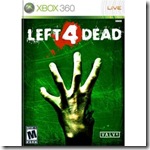 I don’t own this one yet, but I had the chance to play it with my brother-in-law over the holidays, and it’s a lot of fun. While I definitely enjoy head-to-head games as well, I do think that I generally enjoy cooperative games more, as they involve teamwork and greater strategy, and this game has a great cooperative element.

Left 4 Dead allows up to 4 players to cooperate as survivors of a zombie infestation that has devastated the world (or at least their immediate area – I don’t know the whole backstory). The characters have unique appearances but their in-game abilities are equal. All four characters are active all the time, with AI controlling those who are not actively being played by real people. Several of the more powerful zombie opponents are capable of incapacitating a character until another character can rescue him/her, which makes it important to stick together and work as a team.

This is pretty much the game that Dead Rising might have been, as I recall when I got that game thinking over and over again “wow, this would be so cool if it had multi-player”. I played Dead Rising a bit, but never finished the game, as most of the time when I have time to play it’s with other people. It’s not a bad game, mind you, just not a great way to spend time with friends.

Back to Left 4 Dead, the bad guys in the game are fast, which makes them a fair bit different from many other zombie games. Think 28 Days Later or Dawn of the Dead (the remake), and not Night of the Living Dead zombies. Certain things in the game, like car alarms, trigger The Horde, in which literally dozens of the undead swarm the team, usually from multiple dimensions, which is usually pretty exciting/challenging. Anyway, the game gets’ a big Thumb’s Up from me and I’ve already ordered a copy.

Agricola is a fun boardgame for folks who are really into boardgames. If your idea of a complex boardgame is Monopoly, you might want to work up to this one. The first time Michelle and I went to play this, it was kind of late at night and we were both tired, and just trying to set up the game and read the rules proved too daunting for us. That said, now that we’ve played it a couple of times, it’s a lot of fun, and is a great 2-player game. We haven’t even gotten to some of the more advanced rules in the game, yet, and we’ve probably played it half a dozen times so far.

In this game, you’re basically trying to build a farm. You’re competing with the other players for available actions you can take each round, but otherwise it’s a fairly individual game (it can even be played solitaire). Everything in the game has a point value at the end of the game, and the best farm (point wise) will have a mix of many different resources. This game is similar to Puerto Rico

or The Princes of Florence, in that it is essentially a city-building game with very limited resources, where the winner is determined at end-game by the point value of what the player has been able to build. (I think Alhambra is also similar – I got this one as well but haven’t had a chance to play it yet).

I got Gears of War 2 recently and just completed the campaign for the first time a couple of days ago. This game series is a lot of fun, though definitely geared toward adults. The cooperative play is great, too, as well as the need for teamwork, tactics, and the intelligent use of cover. Pick it up if you like first person shooters with a little more realism than Halo but a little higher tempo than Ghost Recon.

It should be old news by now that Rock Band is a lot of fun. Rock Band 2 improves upon the original in several ways, including allowing single player bands, a no-fail mode for parties or totally unskilled players, the ability to import songs from RB1, and some nicer controllers (but no backward compatibility, so you don’t *have* to upgrade). It also does a better job of displaying songs such that you know how difficult each part is before choosing the song, which is nice.

We bought Rock Band for the office last year. It’s a great lunch time or after work game and has been loads of fun. It’s been a great way to have fun at the office, as well as at home with friends or family. It really is fun for all ages – our 1st grader is able to sing a few of the songs, and has a lot of fun, and her grandparents have had fun trying to play along as well.

Hopefully you’ll find a few of these games to be entertaining. Feel free to post your own favorites, and why. Do you get to play games with your coworkers? Family? Friends? Did you any new games in the last few months that you can’t wait to play? Post a comment – maybe you’ll find a kindred spirit.