If you’re a .NET developer, you’re probably familiar with CODE Magazine, which is pretty much the only industry magazine that isn’t owned by a large corporation, and which has always been known for delivering quality content. Recently, the magazine upgraded its look, as you can see at right, and a refresh of the web site is imminent as well. The most recent issue, in particular, caught my attention because it really does have some amazing content. There’s the 2nd part of a DSL article by Neal Ford, who gave the keynote at last year’s CodeMash conference. Ted Neward writes a new “Thoughtworking” column on the subject of languages and their future in the next five years. And there’s an excellent article by Jon Stonecash of Magenic on the Zen of Inversion of Control, that provides an excellent introduction to the topic. 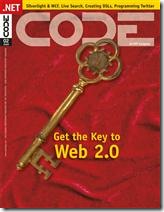 There’s actually quite a bit more as well, from well-known contributors like Paul D. Sheriff, John Papa, Chris Williams, Rod Paddock, Markus Egger, Sahil Malik, and Miguel Castro. You can subscribe risk-free here, or simply check out the magazine online at CodeMag.com (the March/April 2009 issue is here). The focus of CODE magazine has always been more on quality than quantity, and as such it only ships every other month. Thus, it doesn’t overwhelm with its frequency, but provides a lot of great content that is useful and to-the-point.