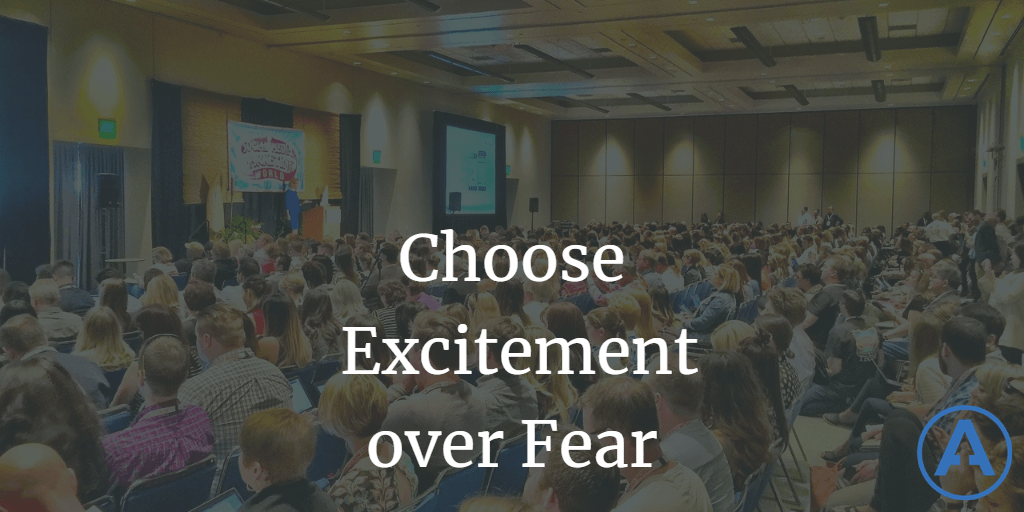 There's virtually no difference, physiologically, between the sensations and symptoms of fear and excitement. But there is a big difference in how we react based on these feelings. If you find yourself living in fear of something, but rationally you recognize that the fear isn't justified, it may help you to try and reshape that feeling into something else, like excitement.

Almost all humans are capable of experiencing fear, and it's definitely something that aids in our individual and collective survival. Fear of things that might kill you, from bears to falls to drowning to fire, are almost always worth heeding. But not all fears have life-ending consequences, and not all fears are justified.

A common fear many of us have is public speaking. Jerry Seinfeld has a classic take on this - it's 21 seconds on YouTube if you're not familiar with it. But for most of us, the worst consequences of speaking in front of others are far from life-altering, and the potential benefits are enormous.

Fear can have a huge range of symptoms, and can be used to describe everything from reactions to real threats to psychological disorders, phobia, or PTSD. Fear manifests with any number of common physical symptoms, such as:

These physical reactions are part of the body's "fight or flight" response, as the body boosts adrenaline to prepare us to deal with the source of the fear (evolutionarily a bear or other existential threat). Some people thrive on the "adrenaline rush" provided by fear, while others strive to avoid it.

We tend to think much more positively about excitement. We're excited to go on vacation. To celebrate a birthday. To reach a milestone.

a feeling of great enthusiasm and eagerness see: exhilaration, elation

We like feeling excited. We're eager to be excited. Excitement feels good, and psychologists think it's good for us:

"Good stress," or what psychologists refer to as "eustress," is the type of stress we feel when we are excited. Our pulse quickens and our hormones surge, but there is no threat or fear.

Think about something you find exciting. Even just the thinking about it may be enough of a stimulus that your body reacts. Your pulse may quicken, breathing shorter and more rapid. You might even get chills, depending on how vivid the memory you're conjuring. Now, mentally associate all of these symptoms with excitement.

When you're facing something you're nervous, even fearful of, but which absolutely holds no danger to you, you're going to feel the same symptoms as you do when you're excited. Choose to think about this feeling as excitement, not fear. Call it that. Say it out loud. Stop saying these things:

I'm too scared to ask for a raise.

I'm really nervous about asking X on a date.

Instead, say these things:

Public speaking excites me. I'm excited to give this presentation.

I'm excited to talk to my boss about the promotion I've earned.

I'm excited about going on my first date with X.

This is the important part, in my experience. You're basically tricking yourself into associating your fear symptoms with their mirror image excitement symptoms. Your body and brain can't really tell the difference, so the only thing that needs to change is your conscious use of language to describe the feeling to yourself (and others). Change the story you tell yourself, and over time when your physical reality continues to match this story (the symptoms match what you're saying), you'll start to believe it naturally.

Incidentally this is closely related to how James Clear talks about building habits:

The key to building lasting habits is focusing on creating a new identity first. Your current behaviors are simply a reflection of your current identity.

This isn't something I just made up. Do a quick search on this topic and you'll see plenty of content on this very topic. Here are a few you might find helpful:

Remember, you're going to experience a physical reaction in anticipation of certain activities. These symptoms are virtually identical whether you're afraid or excited. Using conscious effort, and eventually this can become unconscious habit, you can choose excitement over fear.