On Friday I finally broke down and upgraded my aging Samsung i730 PDA phone. I’ve been with Verizon for some time and have been pretty happy with their coverage and such, and they were giving me there “new every two” deal of $100 off a new phone (with a 2 year contract…) so I figured what the heck. I’m probably the last person I know who hasn’t at least tried a Blackberry, but now that I have this phone I’m really, really happy with it compared to the Samsung.

First, let me tell you about the things that were pain points (and some of the good things) with the Samsung. I bought it in October of 2005, and went through some pain to make it do some of the things I wanted it to do, like act as a modem for my laptop. Eventually, I did get everything to work, and made some (now very popular) blog entries showing how. I also used it for email using its built-in data plan, and that worked pretty well, I thought. It’s basically a PDA with a phone bolted on, and has a full QWERTY keyboard (slide out) and a touch screen that works minimally with fingers but is really meant for the stylus it comes with. I immediately stuck an extended life batter on the thing, which made the total size and weight of the phone much bulkier than most. While it had a touch screen, it also had a lock switch that, once I got in the habit of using before pocketing the phone, made it much less likely I’d be calling anyone from my pocket.

Since the i730 was a PocketPC phone, I could write my own mobile apps for it in Visual Studio and deploy them to the phone. When I bought it, I thought about lots of neat little things I could do like this. I even did do one thing, once (think: Hello World), just to prove I could. But that was it. Another cool feature was that you could use Remote Desktop from your phone to log into a PC and (do whatever needed done in your 200×200 pixel window). That would be pretty cool if I were on the road and really needed to iisreset a server from my phone. But that never happened, either.

Some things I had grown to hate about my phone

For instance, there was no way to select all email messages and just delete them. And deleting them took forever, as in, about a second per message. Yes, that’s forever if you have a few hundred messages per day. Nevermind that actually scrolling through them with the stylus requires you to drag the stylus from the first email down to the bottom of the screen, so it starts to scroll, and then keep on moving the stylus on the bottom of the screen so the scrolling will continue. I don’t know how many hours of my life were spent doing this, but it got old.

Another issue is that I never could get Vista to recognize the stupid thing. So, it was great for contacts and calendar and all that cool stuff back in 2005-2006, but once I upgraded to Vista in November of 2006, the phone and my PC never spoke again. I could still use it as a modem, but even that got flaky and once I installed a USB bluetooth adapter for my laptop, the laptop decided that all DUN modem calls would default to the bluetooth modem (that I never had) even if the bluetooth usb device wasn’t connected, so it became a major trial even to use the phone as a modem while traveling. I came very close to smashing the phone into many pieces after several frustrating bouts with the PC not recognizing it or claiming there was an error with my USB device. 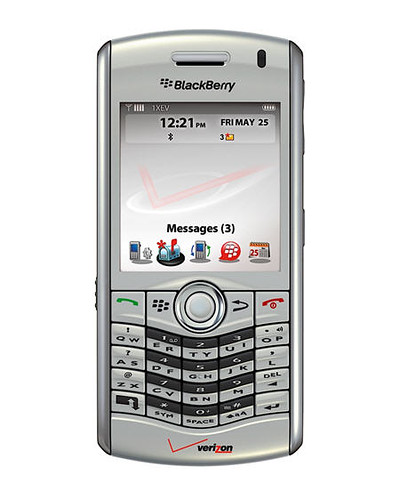 And then came the PearSo of course I did some due diligence and asked my friends if they would recommend the Blackberry Pearl 8130 before I went out and got one. Mostly they ignored me, I think because not many of them had experience with this phone. Ironically, one of the mailing lists on which I asked the question did not get any answers until Friday afternoon after I’d just bought the 8130, and in that case three different people all said the Blackberry Curve was the shit and that anyone who had the Pearl wished they had a Curve. Lame. On the plus side, the Curve is apparently not carried by Verizon, so there was no point in my feeling bad about a phone that my carrier didn’t offer.

So I got the 8130, set up email accounts on it, sync’d it with my laptop, and used it as a modem all without any hiccups. They modem works great and easily. The sync is simple. And oh my god the email is so much better than on the PocketPC. Should I be surprised? I’ve only been told for years that Blackberry is awesome when it comes to checking email – now I’ve seen it firsthand. One feature I love – Delete All Prior. No more scrolling forever! W00t!

Ok, so apart from things working as they always should have, the phone is extremely lightweight and more comfortable to carry and to use. The pearl trackball is extremely easy to use one handed. The actual keys make dialing easier than the touch screen of the i730 that usually required me to use the stylus to avoid mis-typing numbers. And it comes with a full-blown audio jack for stereo headphones and I picked up a 2GB micro-SD card for about $35 with the phone. I haven’t used the headphones yet (I’m sure it plays music fine through them) but you can actually just play music on the phone and the volume and quality are incredible (for a 3oz phone, mind you – it’s not a home theater solution). The phone’s sound is at least comparable to my laptop speakers!

It doesn’t have a full QWERTY keyboard but is has SureType software that basically figures out what you’re going for and auto-completes (or lets you select from several options) as you type. At first I wasn’t too sure about it, and would keep on hitting the delete key until it got each letter correct as I typed it. But then I decided to just “use the force” and trust the thing, ignoring the letters it was showing and continuing to type each word. By the time you get to the third or fourth character of a word, it’s picked the right one and you can just press the trackball to complete it. It works very well for known words, the only time I am still finding that I need to type each character correctly as I go is for non-words like email addresses, and since I’ve sync’d my outlook address book with the phone, it’s not often I’m entering in new addresses.

The phone will also let you use any MP3 as a ringtone, so I figured out how to do that with Audacity (writeup to come) and now have my first ever custom ringtone to annoy people with.

One thing I haven’t figured out yet with the phone is the GPS – it says it has one but I haven’t found any menus or apps that use it. I think it’s supposed to “just work” with Blackberry Maps or Google Maps or somesuch, but again, haven’t gone there yet. Maybe this week at MIX I’ll play with it some more.

PS – anyone looking for an i730 for cheap, email me. After my glowing review, who wouldn’t want it?