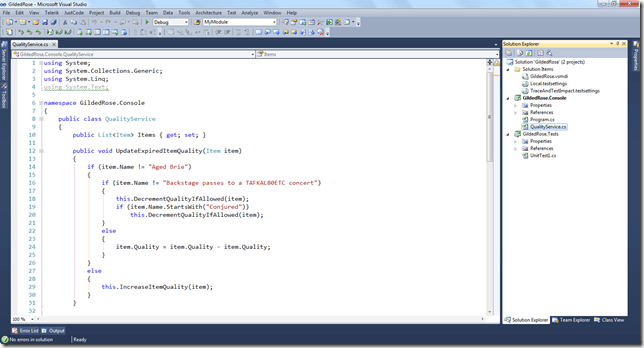 I wrote a few weeks ago about my new Asus Zen Ultrabook computer. I’ve been using it as my primary laptop computer since then, and thought I’d write up a follow-up on how it’s been. Overall, I’m quite pleased with it. The performance is great, the battery life is quite good, and the instant on/off experience makes it almost as quick and easy to use as my phone or iPad. In fact, I’ve just spent the last three days on the road at a client conducting training, and driving as many as four concurrent Visual Studio 2010 instances along with three browsers, SQL Server, and PowerPoint, and everything ran great. So, the short version is, it’s a nice piece of kit and you probably won’t be disappointed with one if you pick one up.

Here are some more thoughts, broken out into a few categories.

The Zen Ultrabook has a smooth metal finish that makes it very solid. In fact, it’s downright dangerous looking, it’s so thin. I’ve joked to a few people that you could use the Asus Zenbook to hack apart zombies, and it would probably keep working afterward. It’s that thin, sharp, and solid. If you think thin is sexy, you’ll want to check this machine out. Its metal case also makes it very rigid. I can hold it with two fingers, open, from one corner, at arm’s length, easily.

Being a super-thin laptop, it doesn’t have some of the things fatter laptops have, like DVD drives or VGA ports. Instead it has mini-ports for video, and only two USB ports. It does have an integrated MMC/SD card reader, though, which is handy, and it comes with a USB-to-Ethernet dongle that I’ve used all of twice in the last month when I needed a hardwired connection. Otherwise, wireless works great.

The keyboard takes some getting used to. It’s not like any other I’ve used in the past, and new users including me tend to make a lot more typing errors on it than typical. It can be rather frustrating, but I’m starting to get the hang of it. The fact that the Home/End/PageUp/PageDown keys are all accessed via the Fn+Arrow keys is annoying, since I’m accustomed t having those as actual keys, but hardly a show-stopper.

The touchpad takes some getting used to, as well. It’s very big and sensitive, and supports both tap-to-click like most touchpads as well as push-in to click, which is somewhat novel Also, the buttons are not separate, but are part of the touchpad, which means that when you think you’re putting your finger on the button area to click, you can still be moving the pointer, so you have to get used to that as well. Once you do, it’s all good.

One minor issue I ran into at one client had to do with the tight placement of the ports on the right side. The mini-video port is so close to the USB port that some USB devices won’t fit into the space while you’re using the video port (e.g. presenting via a projector). It’s only been an issue once, and it’s more a failing on the part of the USB device than the laptop, since there’s generally no reason why the USB device needs to be so fat where it’s connecting to the USB port.

it’s super-light. It plus its power adapter are less than half the weight of my previous laptop.

I mentioned at the outset that the performance of the machine has been great. The screen is big enough to develop productively on – yeah, I’d prefer my desktop workstation with 2 or 3 big monitors, but for a portable computer, this one has been great. And it’s small enough to open comfortably on an airplane, as well, with enough battery to last 5-6 hours. Here’s the specs on the OS and system: 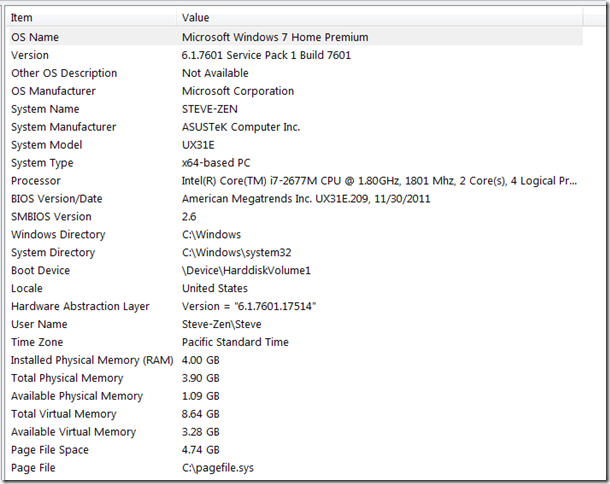 And here’s the Windows Performance Index:

Even with VS, Skype, several browsers, etc. all running, the system is extremely responsive. Here’s what it looks like literally as I’m writing this: 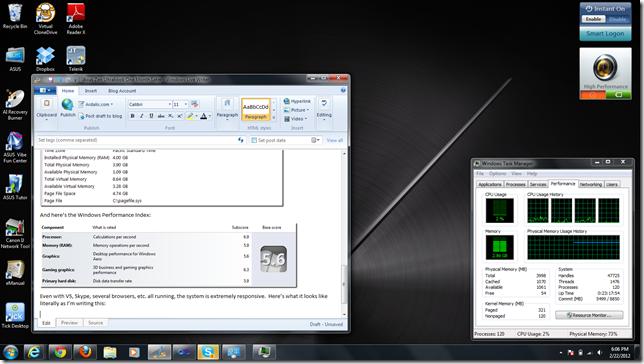 I haven’t installed or played any games on the machine, so I can’t tell you how well it plays Starcraft II or Call of Duty. For work purposes, though, including building large software solutions while on the go, it’s quite good. Here’s a final screenshot of Visual Studio, showing how much space you have: 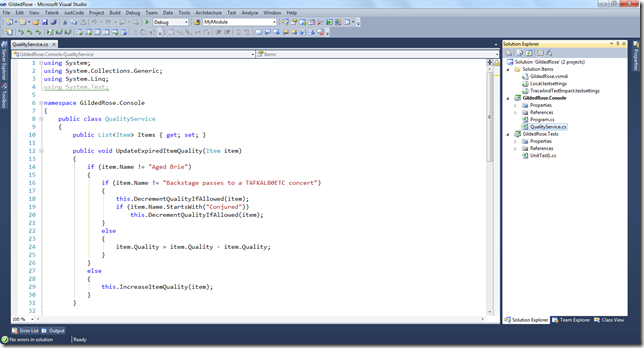 I’m very happy with this machine. More ports, infinite battery life, and a keyboard that is a bit more like ones I’m used to are things I might ask for to improve it. But overall, it’s an awesome machine packed into a super-thin, super-light chassis.

Disclosure of Material Connection: I received one or more of the products or services mentioned above for free in the hope that I would mention it on my blog. Regardless, I only recommend products or services I use personally and believe my readers will enjoy. I am disclosing this in accordance with the Federal Trade Commission’s 16 CFR, Part 255: “Guides Concerning the Use of Endorsements and Testimonials in Advertising.”