Last week a received a new Asus UX31E Zenbook Ultrabook laptop computer, which I’ve been putting through the paces.  I’d like to write up my thoughts on the unboxing and my initial impression of the machine, and I’ll write more in a few weeks once I’ve had some more time to use it.  Overall, I really like it so far.  It’s thin, light, shiny, and feels solidly put together.  It’s also extremely fast to start up and has a very reasonable active use battery life and a better sleep/standby battery life than any laptop I’ve ever owned.

I got my Asus Zenbook Ultrabook on Amazon, so of course it came in an Amazon box.  Inside the Amazon box was the Asus box: 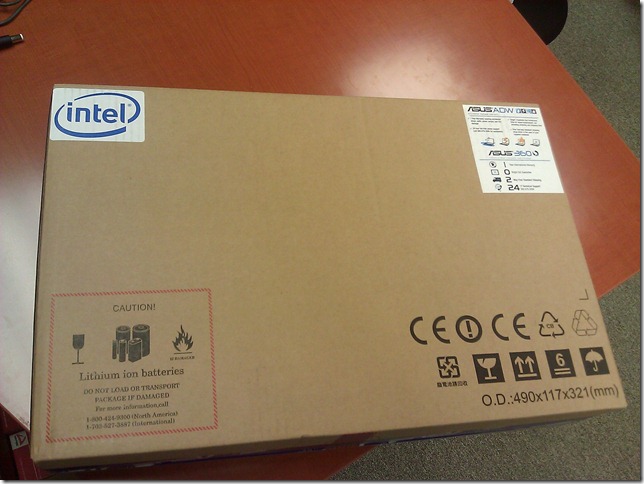 And inside the Asus shipping box is the actual Zenbook packaging: 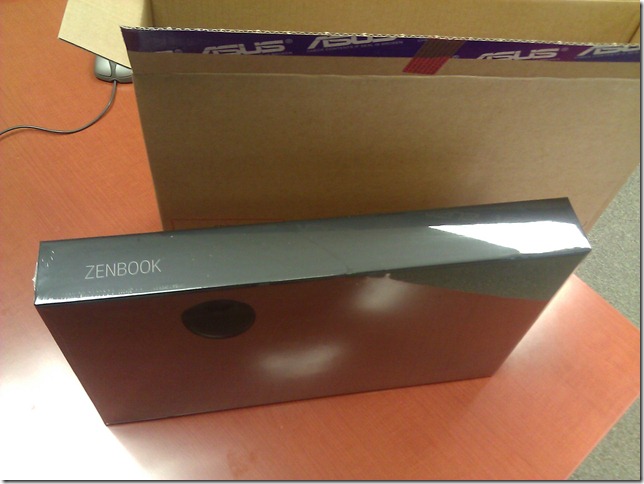 After removing a bit of shrink wrap, this box opens to reveal the Zenbook and its accessories: 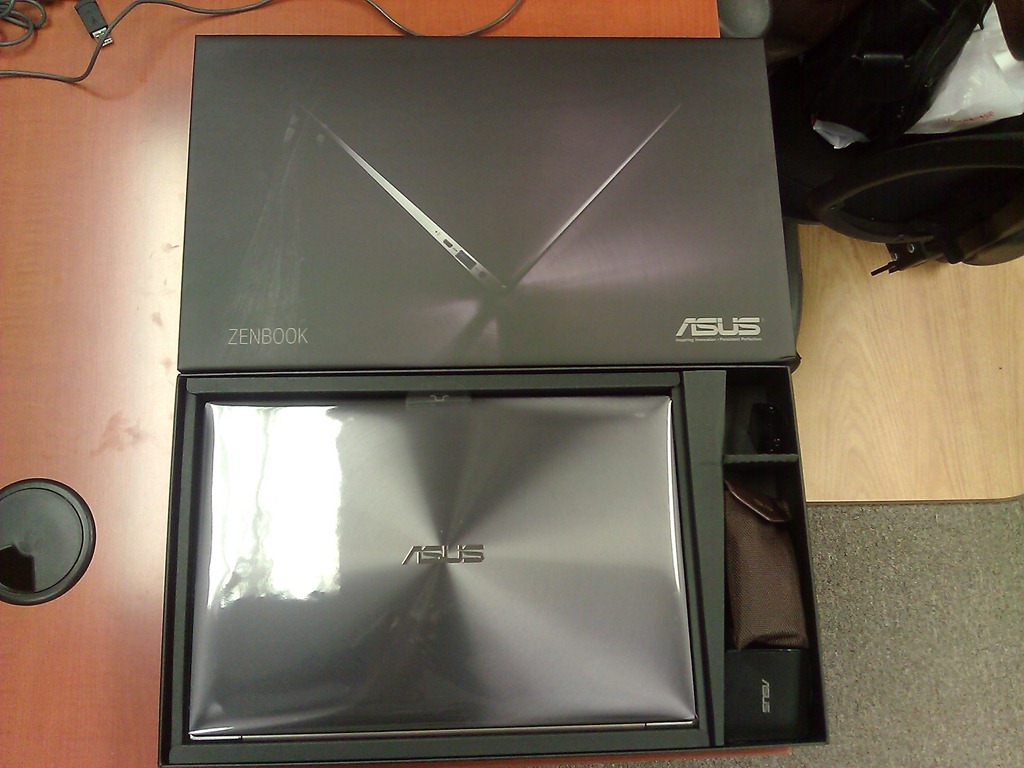 After a bit of unpacking and cleaning up some of the Russian nesting doll style boxes, the components look like this: 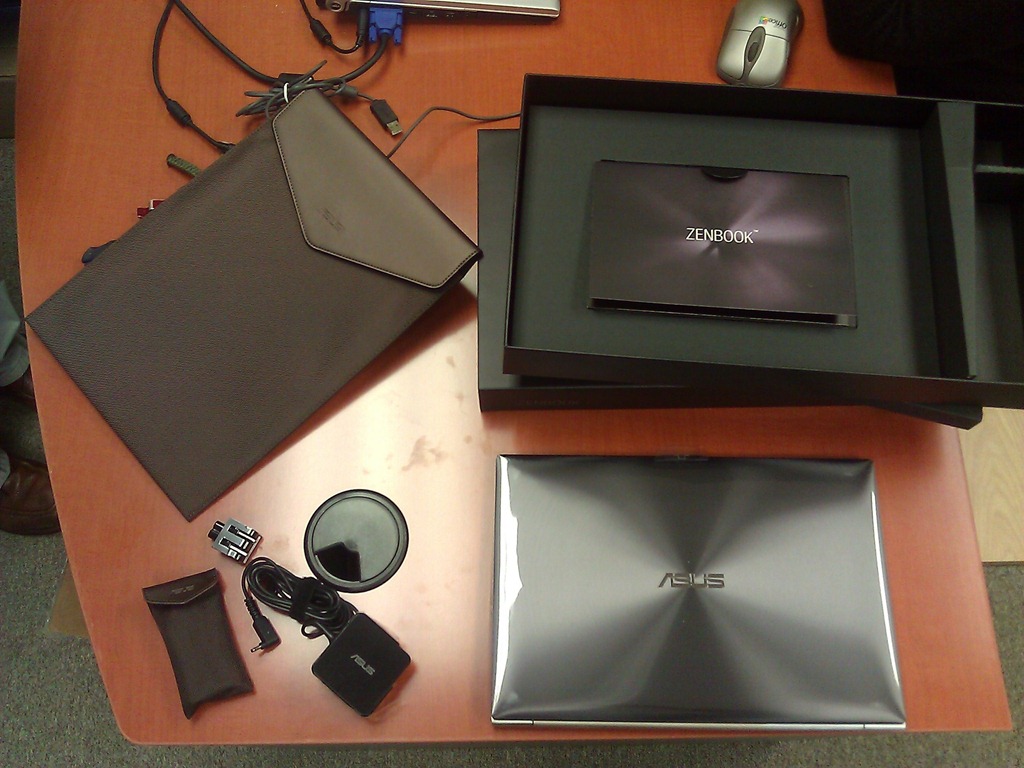 The laptop is incredibly thin.  Here it is compared to a thin Bic pen on my desk: 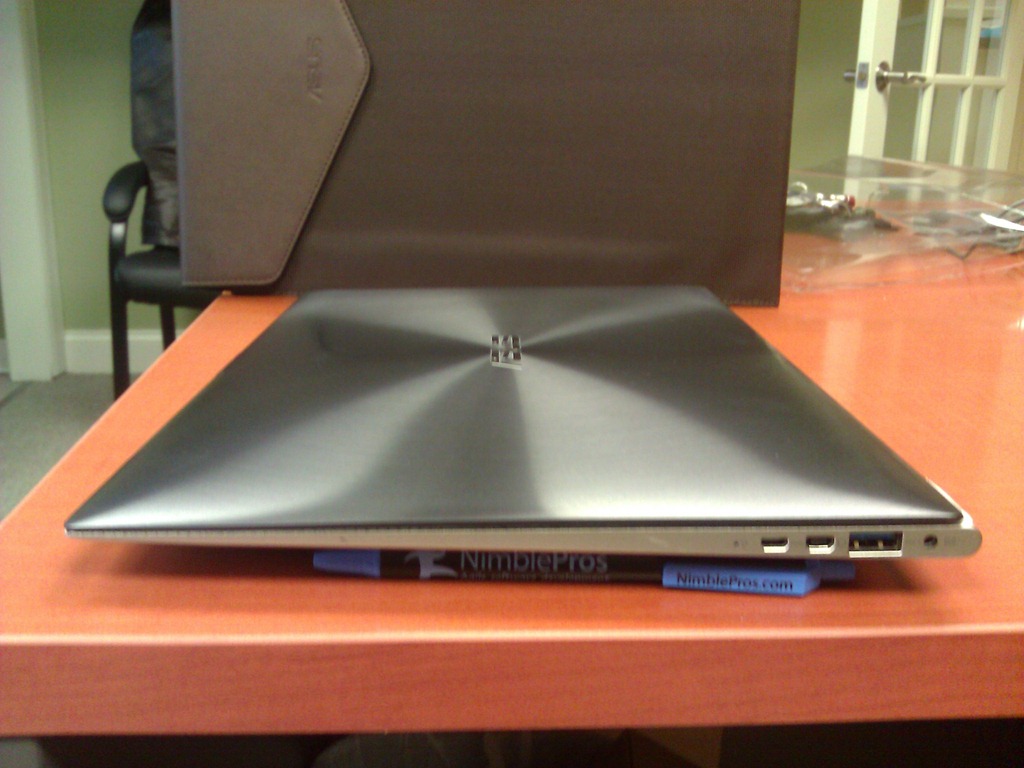 It comes with a magnetic clasp carrying sleeve, which I really like.  It’s handy to slide the Zenbook in and out of, and it has a nice texture and feel to it, in addition to feeling pretty durable (though it’s too early to say how well it holds up to real usage).  Because it’s so thin, the Zenbook doesn’t have ports for Ethernet and VGA, opting instead to support only thinner ports like USB and micro-HDMI.  It comes with a small accessory bag and two adapters:

I do have two small complaints about the accessories.  Firstly, I wish it came with an HDMI adapter, since our office projector supports HDMI.  That said, I wouldn’t want to give up the VGA adapter, since that’s still the universal standard for projectors everywhere.  Secondly, the accessory bag, while compact and stylishly a match for the larger Zenbook sleeve, does not actually fit into the sleeve.  Likewise, the power adapter certainly doesn’t fit into the sleeve, so you’ll certainly still need some kind of proper laptop bag or backpack to hold these things.  It would have been nice if the sleeve somehow could be just as slick and portable as it is now while still somehow being able to hold the adapters and/or the accessory bag, but I suspect those two desires are simply incompatible with real-world space constraints.

To support standard HDMI output from the Zenbook, I’ll most likely pick up one of these HDMI Female to Micro HDMI Mail Adapters for under $3.

The front and back of the Zenbook are very simple.  The smooth finish is great to look at and has a nice, slick feel to it.  The sleeve, again, is a nice addition to the package, as I’m sure it will protect the Zenbook from fingerprints and accidentally slipping from my fingers in transit.

The power adapter is light and the connector the the Zenbook itself is tiny.  I think it’s smaller than a standard 3.5mm headphone jack, though I haven’t measured it or tried to plug my headphones into the power port of the laptop (yet).  I certainly appreciate having a light power supply, since I’ve had laptops in the past with power bricks that weighed (literally) more than the Zenbook itself (I’m looking at you, Alienware).

Once you open up the machine, it has a nice-sized screen, a huge trackpad, built-in speakers on the inside of the screen’s hinge, a webcam, and the same smooth metal finish found on the outside case.

Starting For The First Time

The Zenbook comes with Windows 7 Home Premium 64-bit.  It also has the Bing Bar installed automatically, but this is the only “crapware” that seems to come preinstalled on the device.  I left the Bing Bar running for almost a day before it annoyed me enough to remove it (I did try to give it a fair chance).

Once you’ve started, you’ll see some information about Instant On, which theoretically is a unique Asus technology that saves power and speeds boot time for the computer.  I turned it on and the default desktop widget that displays expected Standby Time doubled as a result.

Asus also has an automatic update service running, which is set up nearly identically to Windows Update.  You’ll want to make sure you get the latest drivers via Asus Update, as I have heard of others having issues that were resolved by these updates.  One common issue I’ve seen relates to the trackpad.  It’s different from others I’ve used, as it is both more sensitive to touch and by default somewhat slower (in terms of how fast the mouse pointer moves on the screen based on how far you move your finger – adjustable in Windows).  The left and right “buttons” are actually just regions on the touchpad, too, and so occasionally I’ve accidentally dragged things as I was trying to click.  These are I’m sure just things I need to get used to.  I’ve also read others’ complaints about the keyboard.  It, too, is different from most laptop keyboards I’ve used, but I haven’t had any problems with it, and I’m a relatively fast touch typist.  It requires some getting used to, just like riding a new and unfamiliar bicycle, but once you’re acclimated to it, it’s fine in my so far limited experience.

The one other oddity I noticed so far is that the power button is placed where the Delete button usually goes (and the delete key is just to the left of the power key).  I almost, once, hit the power button while going for the delete key.  I’m pretty sure it just would have gone to sleep (which it does quite quickly) and I’d have simply had to wake it back up (also very quick), but I caught myself and have had no issue with remembering where the del key is since.

Disclosure of Material Connection: I received one or more of the products or services mentioned above for free in the hope that I would mention it on my blog. Regardless, I only recommend products or services I use personally and believe my readers will enjoy. I am disclosing this in accordance with the [Federal Trade Commission’s 16 CFR, Part 255: “Guides Concerning the Use of Endorsements and Testimonials in Advertising.”](http://www.access.gpo.gov/nara/cfr/waisidx03/16cfr25503.html)

Here’s another review of the Zenbook on CNET you may find interesting if you read this far.  I agree with their sentiment, “who doesn't want a thin, unibody metal lightweight laptop that starts fast and has a great battery life?”