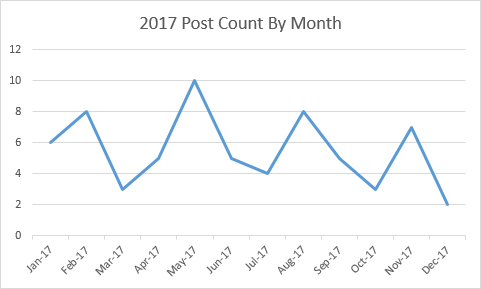 Now that 2017 is behind us, I thought I'd share some stats and other details about my blog (and podcast and other such things) for those who may be interested. 2017 was a pretty solid year for me as a blogger, and I wrote 66 articles, averaging about 5.5 per month. Apparently I write a lot in the middle month of each quarter (Feb, May, Aug, Nov) for no reason I can fathom:

Looking at Google Analytics, 2017 was a pretty good year overall for the site's reach numbers. It's still not huge, but the growth is definitely trending in the right direction:

Here are some of the top articles from 2017. Some of these are not ones I would expect, but apparently are just really popular problems people search for and my articles provide the solutions they need (which is great). Others, like New is Glue, are articles I really want a lot of developers to read and know about, so I'm glad to see that one on the top 10 list.

Apparently a lot of people really like the Nuget articles on reinstalling packages and using the dotnet CLI to add packages. The #3 article is on SQL Server errors is over 7 years old but still consistently gets a lot of viewers. It fixes a very frequent problem, and I've found myself looking at my own article more than a few times while googling for that error.

I wouldn't really call it a "newsletter", but I send out a developer tip via email every Wednesday. I've been doing this for over a year and a half (without missing a single Wednesday), and tomorrow's tip will be #90. According to MailChimp, last January I had about 600 subscribers. Today, I'm at about 2100. That's not a huge number as email lists go, but I'm very pleased with the percentage increase.

Unfortunately, I've been plagued by bots joining the mailing list for the last six months or so, which is driving up my MailChimp costs, and their support team's response so far has been underwhelming (basically, here's how you can bulk unsubscribe them, but no help finding out where they're coming from or how to prevent them or offering to filter out known bad domains for me). I obviously don't make any money from the weekly tips emails, so it's annoying when large numbers (like 10+ per day) of spam email accounts join the list and screw with my stats and cost me more money (and time dealing with the problem). I honestly have no idea who, besides MailChimp, would benefit from adding (and confirming) bogus subscribers to random mailing lists online. If you know, let me know. And if you have a mail provider you love and would recommend over MailChimp, my loyalty to them is ebbing.

In 2017 I discovered Jonathan Stark's Ditching Hourly podcast (which you should definitely listen to, by the way), and it opened me up to the possibility that I could do a podcast. Prior to this point, most of the podcasts I've listened to or been a guest on have used a pretty traditional interview-with-guest format. Jonathan's podcast was different. The first episode is literally 55 seconds. The episodes are mostly just him, telling a story or making a point, usually in under 10 minutes or so. I know I don't have the time for a DotNetRocks style podcast with different guests every week (or several times per week) with hour-long shows. Nor do I have the time for something like CodingBlocks, which has 3 hosts (and no guests) and can often run up to 2 hours per episode. But 5 to 15 minutes to share a tip? That's totally doable for me, and will let me learn more about podcasting and audio as a medium. I also foresee podcast consumption growing as more and more cars have built-in support for Apple Podcasts and similar functionality. So it seemed like a good time to jump in.

My "new" podcast, Weekly Dev Tips, published 14 episodes in 2017 with 24,203 downloads. Of course, since I started it late in the year, that's only a partial year's worth of stats. So far my top episode, which is also my most recent one, has over 2500 downloads. The "weekly" in the title is more of a guideline than a rule, but I should be able to publish another 30-40 episodes in 2018, I think. Subscribe and give the first few episodes a list (I recommend listening to them in order). If you're already a regular podcast consumer, I suspect these short little episodes will fit in nicely between the longer shows to which you're already subscribed.

I wrote (and later updated for 2.0) an eBook on Architecting ASP.NET Core Apps using Azure for Microsoft. You can learn more and download it for free here. It has an accompanying Online Store sample that you can use to help you learn ASP.NET Core and a number of design patterns and Domain-Driven Design topics. I'll probably continue to update it for Microsoft this year.

I published a course on ASP.NET Core, the ASP.NET Core Quick Start, and then updated it to the latest version last month. I'm happy with how the course turned out and reviews of the course have been very positive. I'd like to see more students students than it's getting currently, but I attribute that to competing with Pluralsight (where I still have a bunch of content) and it still being relatively early days for ASP.NET Core. Hopefully things will pick up in 2018.

Overall, 2017 was a pretty good year for me from a content perspective. In 2018, I plan to continue publishing articles here and occasionally cross-posting to Medium or LinkedIn. I'll see if I can hit or exceed the 66 articles I published here last year (only 65 to go after this one!). I'll keep sending out developer tips every Wednesday, and I'll keep recording podcasts. I also have a couple of ideas for eBooks to do on my own using LeanPub or something similar, too. Finally, I hope to get more online courses developed and published in 2018 than I did in 2017. I really enjoy creating them and I think it's one of the best ways for me to reach and assist large numbers of developers looking to improve themselves. If you've read this far and you have any requests for topics, articles, samples, or courses, please let me know in the comments below.

Thanks and Happy New Year!