If you just read my blog for technical stuff, you can skip this one.

So at the start of the year I set a few personal goals. Since the best way to achieve goals, I’ve found, is to break them down into smaller and smaller pieces (as in “The journey of a thousand miles begins with the first step”), I thought I would assess my progress on the five goals I set for myself.

Goal 1 – 200 Blog Posts in 2008. That breaks down nicely into 50 per quarter, and in the first quarter I published 52 posts, just barely on track. February was pretty light with only 9. I’m sure if it had had 30 days in it I could have written a lot more posts. Of course, if it had had only 28 days, I might not have had nearly as many… We’ll call this one 25% complete.

Goal 2 – Lose 17 pounds. So far I’ve lost 10 pounds. That’s pretty good, and definitely on track, although I’m still hovering around where I was for most of 2007 (I basically lost what I gained over the holidays and maybe a tiny bit more). So, it’s definitely good but I know the next jump will be harder. And then keeping that all off as of 1 January 2009 will be hard. But I’m on track. This goal is about 58% complete.

Goal 3 – Write a Silverlight book. Progress has been slow. I have two chapters due this month and the whole thing should be turned in for the first draft by mid-June. So I need to make a lot of progress this quarter. If I do another update around the start of July, this goal should (had better be) close to complete. Right now it’s probably only around 5%. 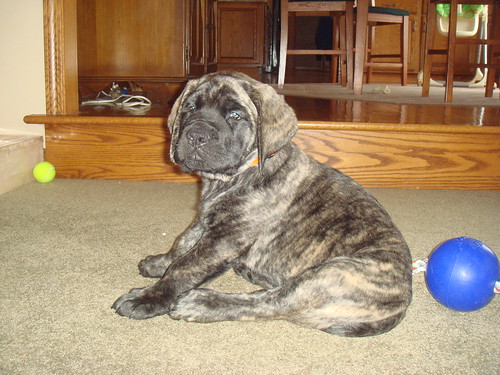 Goal 4 – Get a puppy. Done! We got an English Mastiff puppy named Odin in January. He was about 8 weeks old when he came home and around 20-25 pounds. Now he’s about 4 months old and 60 pounds. It’s amazing how fast these guys grow. This was the easiest of my goals to achieve, and is now 100% done.

Goal 5 – Achieve next belt in karate. I’ve been practicing regularly, which probably has helped with Goal #2. I don’t expect to test for my next belt until Fall, but I think I’m on track, so we’ll say this one is 25% done at this point.

If nothing else, putting these out for public consumption helps motivate me to work toward them, since now if I don’t achieve them, the whole world knows about it. My apologies to those of you who simply don’t care. Why did you keep reading this far?