PDC is fast approaching and Cloud Computing is the theme – and all the rage for everyone else in the Industry media. Amazon recently announced they'll be extending their compute cloud to support Windows and real databases. Here's a look at some recent trends in the tech industry, using Google Trends.

The topic of DST is likely of at least marginal interest to most software developers, as working with DateTime constructs is a frequent requirement for us (and often a source of frustration). I wanted to confirm when it was this year and that led to the rest of these trend searches (I once missed a flight due to a change in the date of DST that my alarm clock's auto adjustment failed to pick up). FYI: Daylight Savings Time in 2008 will Fall Back the first Sunday in November. 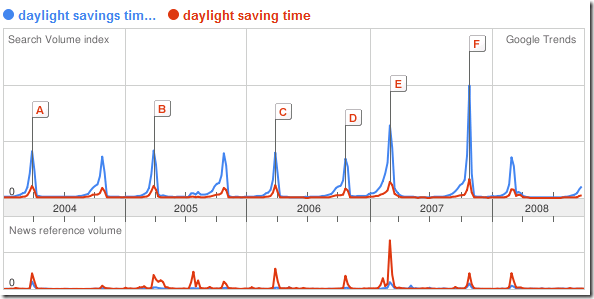 Interesting (and expected) that twice a year folks become interested in this topic. Note that the main regions who care are US, Canada, Australia, and the UK. Most of the world doesn't observe DST. And contrary to what I thought I knew, Ben Franklin didn't invent DST and it only started in the early 1900s (according to the Source Of All Knowledge: Wikipedia). 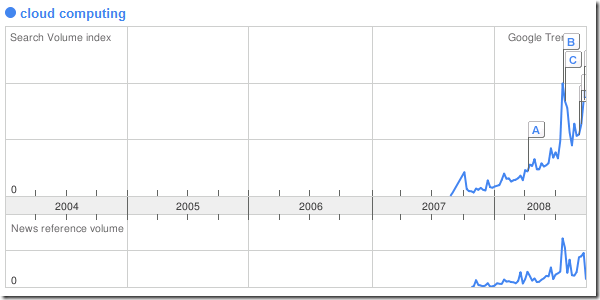 If I were a betting man, I'd bet on cloud computing to be a big upcoming trend in the next several years. It first hit the search term scene a little over a year ago, and it's gone up rather drastically since then. I'd look for it to peak in November this year after PDC and then to plateau or rise gently after that.

Amazon's S3 and EC2 services have been around for a while – let's see how Microsoft compares thus far.

I'd say Microsoft is going to catch and surpass Amazon by PDC time.

Looking at another Microsoft event and announcement, let's see how Silverlight is doing in terms of interest. 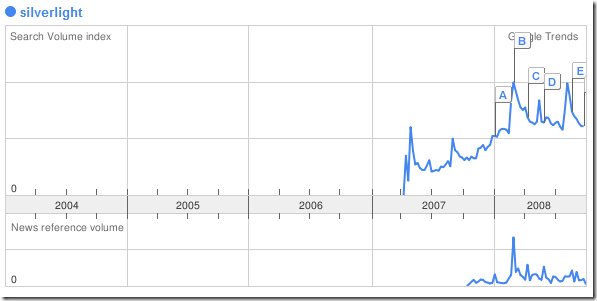 Silverlight is still going strong. I predict it will go up steadily once Silverlight 2 is released, slated for later this year and most likely at PDC, I would say.

So what about hosting? Is anyone looking for cloud hosting solutions? Compared to what? Let's look at two comparably small sets of terms. 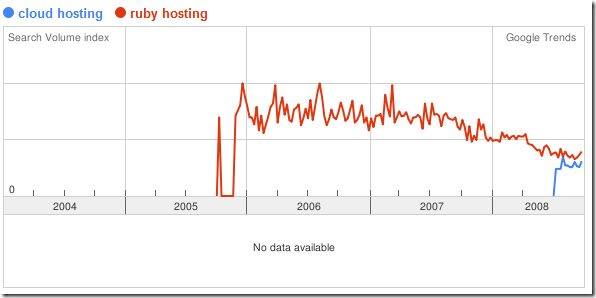 Cloud hosting didn't exist as a trend before 2008 Q3 and now it's nearly as popular a search term as ruby hosting. Clearly Ruby Hosting isn't all that popular, but just how does it compare to say ASP.NET and PHP?

Ruby vs. ASP.NET vs. PHP Hosting

Clearly the trends for all three of these are heading downward, as I think the hosting marketplace has largely shaken out and become somewhat commoditized. With sites like GoDaddy offering cheap hosting along with about a million easy to use web publishing and blogging platforms, the need for hosting is obviously in decline.

So what else is new? What about ASP.NET? Remember when it was Atlas? And what about this new jQuery thing that's not really new but is now going to ship with Visual Studio? 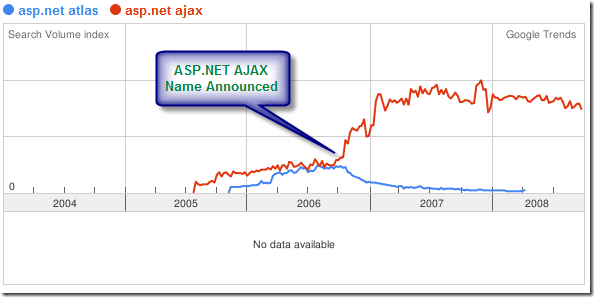 How about data access technologies? Would it surprise you to learn that NHibernate has been a search trend since late 2004, with greater popularity than either LINQ to SQL or Entity Framework's high water mark since 2006 (that is, NH's 2006 and later popularity exceeds the best the others have ever achieved). I doubt this reflects adoption, but it's interesting nonetheless. Perhaps it reflects people searching for documentation…

NHibernate vs. LINQ to SQL vs. Entity Framework

How is interest in ASP.NET MVC coming along, with its hopeful release some time in 2008 as well?

Lastly, in the self-fulfilling prophecy department, how many people have been looking for a recession, since about a year ago? It certainly appears the popularity of a recession has gone up dramatically in the last 12 months.

Look up bailout as well, though the graph isn't terribly interesting since it's almost asymptotic… Fun times in the financial industry. Now back to more regularly scheduled geekdom.